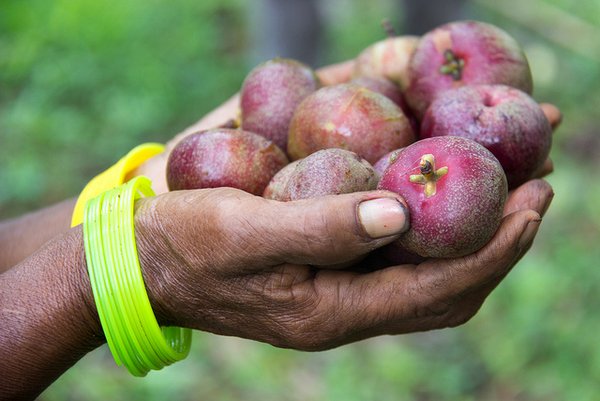 India’s first ever genetic garden aims to safeguard rare species that are important for food and medicine such as Garcinia Indica a local fruit of villages in Western Ghats.
Photo: © Bioversity International/E.Hermanowicz/Flickr.com

A living laboratory for rare fruit trees, roots, tubers and medicinal plants has opened in Bangalore/India. It is India’s first ever genetic garden to safeguard rare species that are important for food and medicine, in one of the world’s 35 global biodiversity hotspots, near the Western Ghats in the Indian Karnataka State.

According to Prem Mathur, Regional Director, Asia, Pacific, Oceania of Bioversity International, the garden will safeguard a genepool of rare species of flora endemic to the Western Ghats and will be a ‘living laboratory’ to study these species and how their different traits can be used to help improve the nutrition and livelihoods of farming households and rural communities in the region. Mathur expects a total of 60 rare fruits, 13 species of roots and tubers and 65 species of medicinal plants to be planted across the five-acre plot.

Mathur noted that many traditional and localised species had been ‘forgotten’ as the trend for modern staple crops like rice, wheat and maize dominated agricultural production and diets not only in India, but throughout the rest of the world. “With high rates of malnutrition and yields being affected by climate change, looking back to our rich plant genetic heritage can help us adapt to the future,” he writes in a press release of April 2015. “By studying differences between these species and varieties and the associated traditional knowledge of their use, we can better understand varieties which have traits that are better adapted to changing climatic conditions or are more nutritious,” he notes.

At the opening ceremony of the fruit garden, several distinguished guests planted a fruit tree that is commonly found in the region together with other plants such as jackfruit, custard apple, Indian gooseberry, jamun, mangosteen, tamarind, wood apple, pomelo, karonda and water apple.

“Thanks to the generous support of the University of Horticultural Science (UHS), in Bagalkot, Karnataka, we have these facilities situated on campus both in terms of office space and land for the genetic garden,” stresses Mathur, adding that this gives the project direct access to expert professors, and to MSc and PhD students, who can learn why these endemic species are so important for the region’s future. “I really see this as a ‘win-win’ situation for exchanging knowledge and ultimately also a ‘win-win’ situation for species diversity and the rural communities who depend on it for their food and livelihoods,” writes Mathur. “We can also monitor more closely the research we are carrying out in the region, such as work with local partners to improve the nutritional and livelihood security of smallholder farming families through better use of both cultivated and lesser known tropical fruit tree diversity.

”According to Mathur, Bioversity International has a long history of working on how agricultural biodiversity can contribute to food and nutrition security in India, with the support of the Indian Council of Agricultural Research (ICAR). Giving an example, he cited a ten-year project to promote minor millets in four districts of India, including Karnataka, in terms of their nutritional content, their resilience to dry conditions and their income generation opportunities.