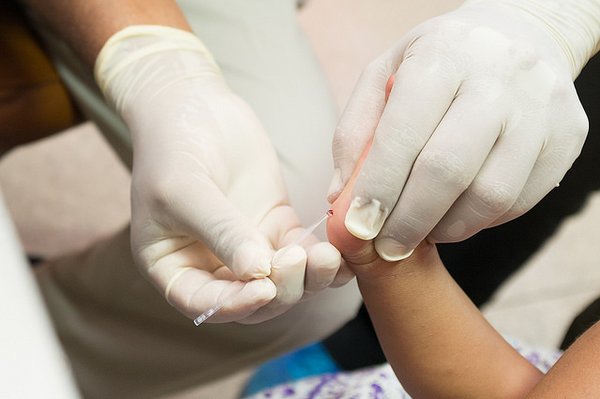 The bio-sensor can detect the presence of malaria in the blood of a patient within 30 minutes.
Photo: © Pan American Health Organization

A simple, sensitive and reduced cost paper-based bio-sensor with a low quantity of chemicals for the early diagnosis of malaria has been developed by Brazilian researchers. It detects falciparum malaria protein within 30 minutes. The device could be useful for endemic hard-to-reach populations.

A strip of chromatography paper similar to that used in rapid pregnancy tests is the basis of a bio-sensor for detecting malaria that has been developed by Brazilian researchers.

The strip, designed for early diagnosis of infection caused by the Plasmodium falciparum parasites responsible for the most aggressive and lethal form of the disease, gives a result within 30 minutes of being immersed in a solution with samples of blood, serum or saliva of an infected person. Current tests take between two and ten days to give a result.

If the paper strip changes its colour, it means that histidine-rich protein 2 (HRP2) — a protein excreted only by P. falciparum in the first days after the infection — is present in the bloodstream.

During lab tests, the device was able to detect the presence of HRP2 even when the parasite had produced it in low quantities.

The bio-sensor has been tested with blood samples of both healthy people and people infected by the parasite. The samples were provided by the Parasitological and Entomology Laboratory of the Hospital das Clinicas at the University of Campinas (Unicamp) in Brazil.

The current cost of production for the test is estimated at USD 0.50, according to Lauro Tatsuo Kubota, from the Chemical Institute of Unicamp, and lead author of the study that describes the technology, published in the journal Sensors and Actuators B: Chemical.

“If production increases, its cost could be lowered,” Tatsuo told the science and development Internet newsletter SciDev.Net.

Malaria is transmitted by mosquitoes of the Anopheles genus that draw blood contaminated with Plasmodium parasites. Its initial symptoms are similar across all malaria types (fever, chilling, headache and body aches), but the disease may become more severe depending on the causative agent.

Although the P. falciparum parasite is prevalent in Africa, it also occurs in 20 Latin American countries, particularly in Brazil, and is estimated to cause six deaths per 100,000 people every year across the region.

Osvaldo Novais de Oliveira, from the São Carlos Institute of Physics at the University of São Paulo, says the bio-sensor could have a high social impact by improving diagnosis, especially in areas far from urban centres.

“Early diagnosis of malaria is vital in order to increase the chances of treating infected people,” de Oliveira tolds SciDev.Net. “But for this, it is indispensable to have a low-cost technology that can be broadly used, mainly by the most vulnerable populations.