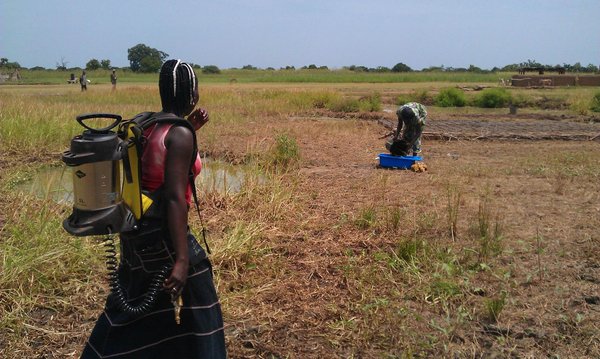 Scientists at the University Hospital Heidelberg Institute of Public Health in Germany are successfully transferring a new method of mosquito control from Germany’s upper Rhine region to Burkina Faso in West Africa.

A method of mosquito control successfully tested in the upper Rhine region in southern Germany can help in Africa to curb the tropical disease malaria, which is transmitted by mosquitoes. This is the conclusion of the project “Ecologic Malaria Reduction for Africa” (EMIRA) at the University Hospital, Heidelberg Institute of Public Health. The Manfred Lautenschläger-Foundation has promoted the EMIRA project in Burkina Faso in West Africa with around EUR 450,000. Since 2013 the scientists, in cooperation with KABS, a local German association to control the gnat scourge (Kommunale Aktionsgemeinschaft zur Bekämpfung der Schnakenplage e.V.) in Speyer and the Burkina Faso Ministry of Health, have been using a biological agent in the country’s north-west. This kills larvae in breeding waters and prevents the spread of the mosquito vector.

“The transfer of mosquito control from the upper Rhine to Burkina Faso has been an outstanding success,” project director Prof. Rainer Sauerborn, University Hospital Heidelberg, Institute of Public Health, said at the project presentation on 18 October. “The number of mosquitoes in the villages decreased significantly.”

The larvicide Bti, a protein from the soil bacterium “Bacillus thuringiensis israelensis” has been successfully used in the upper Rhine river region for over 30 years.  The agent is easy to handle – which is important for use in Africa. The larvicide comes in powder form, and is dissolved in water and sprayed on waters near the banks. “The method is safe, its action is reliably limited to mosquito larvae, and it is harmless to people and other animals and plants,” stresses Prof. Norbert Becker, scientific directors of KABS in Speyer.

The scientists counted the number of mosquitoes in the villages using light traps, devices which attract bugs from a relatively small region and trap them in a mesh cylinder. “The mosquitoes are counted in the laboratory and the species and gender determined,” Sauerborn explains. Only the species Anopheles, and only the females transmit malaria. “The number of anopheline females is a good indicator of the risk of transmission. Fewer means a lower risk of infection.”

As nationwide treatment of all stagnant water and pools in rural regions would be too expensive for very poor West African nations, the scientists tried a new, selective application. In cooperation with remote-sensing specialists at the Centre National d’Etudes Spatiales (French National Centre for Space Research – CNES) a team from the Institute of Public Health developed a technique for using satellite images to identify breeding sites favoured by mosquitoes. Malaria-transmitting mosquitoes have certain preferences for bank vegetation, location and depth of water. Using these risk maps, the waters were selectively treated with the biological larvicide. “The selective use of the larvicide is a new approach in the fight against malaria,” Sauerborn explained. In the pilot district researchers are showing how the technique is effectively combating malaria-transmitting mosquitoes.

“This makes the treatment relatively cheap at less than one dollar per inhabitant, affordable even for countries like Burkina Faso,” commented Markus Lautenschläger, director of the Manfred Lautenschläger-Foundation. “We hope that we’ve added another weapon in the fight against malaria with the project .”