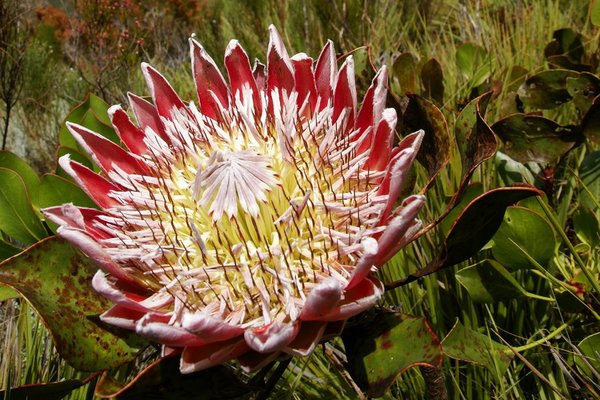 Climate change is threatening the diversity of flora in the South African Cape Region. Researchers from the German University of Hohenheim seek to save the area’s wealth of plants species and are currently compiling recommendations on how plants in reserves can be sustainably used but also protected.

South Africa’s Cape Region is one of the world’s areas richest in biodiversity. Now this diversity is under threat from climate change and changes in land use.

Focusing on what is probably the Region’s most well-known group of plants, the proteacae, scientists at the University of Hohenheim in Southern Germany want to draw up recommendations on the designation of new reserves, fire management and the sustainable use of these plants as cut flowers. The project is being supported by the German Research Foundation.

The Cape Region is regarded as a global biodiversity hotspot. Around two thirds of the plants in the region occur nowhere else, which is why it also represents one of the world’s six floristic kingdoms.

“Transformations in land use have strongly changed the Cape Region of the past,” explains Frank Schurr, Professor of Landscape Ecology and Vegetation Science at the University of Hohenheim. “Furthermore, the World Council on Climate Change has forecast for this area that in future, it is going to become significantly drier and hotter.”

Now the question arises whether the species will be able to migrate quickly enough. “Are they able to reach areas in time to survive there in future? Which species are most endangered? What can people do?” These are questions that the scientists are addressing in the “DynNiche” project. They chose the proteaceae. These very beautiful trees and shrubs occur exclusively in the Cape Region, where they are also used as cut flowers.

“As a rule, one visit per area is enough to establish reproduction and mortality for the proteaceae,” Schurr explains. “Their development is closely linked to fire. They store their seeds in cones that remain attached to the plants and only open up after a fire. When you visit areas that were burning only a short time ago, you can therefore establish the saplings and plants that are sprouting forth again despite the fire in just one inspection. Using the tree skeletons that the fire has stripped of leaves, you can find out how many plants used to grow in the area.”

In this manner, the researchers have examined 26 species in more than 3,000 populations. From the data, they can derive forecasts on how climate change and fire regime are going to impact on the size of populations and the geographic distribution of these species.

“We can already state that the species respond to climate changes in very different ways,” Schurr states, summing up the initial results.

“Currently, a fire occurs every ten to 20 years on average. The latest research results show that these intervals are to become shorter owing to climate change,” Schurr explains. “This can lead to extinction in some localities if a population is killed off before it has blossomed for the first time.”

“In order to allow the species to be able to escape the changed climate, one has to find out where new reserves and migration corridors are needed,” says Schurr. “The speed of migration is the crucial factor. If migration is too slow, one will have to consider replanting or, as the last resort, archiving in seed banks.”

The scientists hope that it will be possible to transfer the results to other species among the 9,000 different plants in the Cape Region. In a further step, they want to gain insights for other regions with a Mediterranean climate and also for ecosystems in Germany.