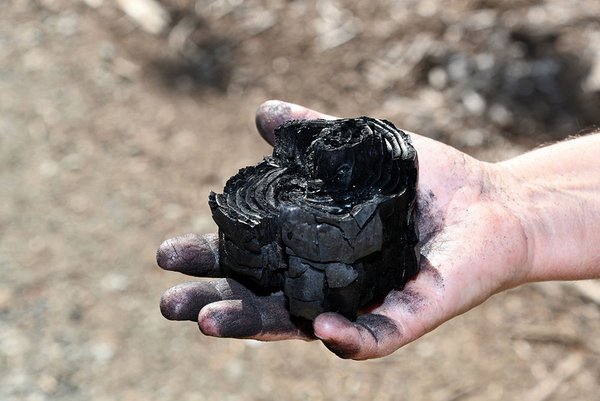 Biochar – a soil enhancer for (nearly) all cases

Increasing pressure on farming systems has severely affected soil health and fertility. Biochar, a multifunctional carbon material, is being actively explored globally for simultaneously addressing the concerns related to improving soil fertility and mitigating climate change. The authors of this article present research results of the effects biochar has on soil health and crop productivity, but also of where the limits lie in its use.

Soil health is more important today than ever before. Carbon and the structure of soil go hand in hand. Soil fertility results from the presence of organic carbon, i.e. carbon-based molecules which have their origin in everything that was once alive. Healthy soils need a carbon content of nearly five per cent, and without sufficient solid carbon, soil tends to lose basic structure and properties. Carbon present in soil is a major active pool of terrestrial carbon. Total carbon in terrestrial ecosystems is estimated to be around 3,170 gigatons, of which nearly 80 per cent (i.e. 2,500 gigatons) is found in soil. Converting land under natural or unmanaged vegetation to crop production releases large amounts of carbon from standing biomass and soil. As a result, soil organic carbon targets, policies and measures will play a pivotal role in the intended nationally determined contributions (INDC) set by the countries for the United Nations Framework Convention on Climate Change in achieving the global climate targets.

Biochar as a soil activator

There is a need to explore materials that can simultaneously help in soil health improvement and climate change mitigation. Biochar is a carbonaceous material with unique physicochemical properties. It has received significant attention in the last decade thanks to its multifaceted benefits related to the broader fields of climate change, agriculture, wastewater treatment and soil health. Biochar is reported to significantly enhance the soil quality and crop yield, carbon sequestration and reduction of greenhouse gases (GHG) emissions (carbon dioxide, nitrous oxide and methane). It is produced through the pyrolysis process by heating biomass (namely tree and crop residues, grasses, manures, agricultural wastes and wastewater sludge, etc.) at temperatures between 350 and 600 °C in the absence of oxygen. Biochar is a great source of carbon sequestration as this carbon can be stored in the soil ranging from a few years to an excess of 1,000 years. It would otherwise end up being in the environment acting as a cause of greenhouse gases. It is estimated that one ton of biochar added to the soil can sequester approximately 2.2–3.0 tons of carbon dioxide (CO2). Research revealed that around 12 per cent of the total anthropogenic carbon emissions (0.21 petagrams) resulting from change in land use could be offset annually in soil, if slash-and-burn was substituted by slash-and-char practice.

The technique of using biochar to improve soil health has been known since ancient times. The indigenous people of the Amazon Basin produced biochar and thus improved the soil, which was not very fertile. The discovery of this high fertility in ancient dark, carbon-rich soils called “Terra Preta” has made researchers world-wide curious about biochar and its impact on soil. Researchers are increasingly investigating the effect of biochar on soil properties with large-scale field trials as it acts as a carrier for nutrients and a habitat for microorganisms present in the soil.

Carbon makes essential nutrients such as nitrogen, phosphorous and potassium available to plants and decomposing microorganisms. Soil carbon is known to manage the efficient nutrient supply to the plants. It reduces nutrient loss in groundwater, thus enhancing transfer to the plants. Scientific investigations also indicate positive effects on water retention capacity, which ultimately results in a lesser requirement of water for crop production, as well as reducing energy requirement for irrigation. Furthermore, the presence of biochar lowers soil bulk density, which provides a better environment for seed germination and root expansion. In addition, biochar can immobilise toxic elements in contaminated soils.

Loss of soil carbon induced by agriculture is the second-highest anthropogenic source of global carbon emissions after the energy sector, with a 20 per cent contribution to total greenhouse gas emissions. Therefore, sustainable and zero-emission agricultural practices are urgently needed that can increase soil organic matter while capturing greenhouse gases from the environment and fixing them in the soil. This fixation of the carbon in the soil would benefit the soil's health and lower the climate impacts. Soil carbon plays a vital role in establishing the right balance between chemical, physical and biological properties. Biochar becomes an essential tool for maintaining crop productivity in addition to soil health. It helps in improving water holding capacity, redox properties, sorption capacity, maintaining pH and nutrient retention. Biochar amendment presents a cyclic approach where it would help in higher crop production, and this enhanced production would utilise more CO2 from the environment and produce higher biomass quantity which can then be converted to biochar. Therefore, soil can act as a carbon sink, which is a win-win situation for all.

However, the use of biochar also has some disadvantages that need to be taken into account. So it is noteworthy that biochar does not always increase productivity. The type of soil, agro-climatic zone and biochar application rates are essential in determining the positive or negative impact. If the soil is already nutrient-rich, then biochar tends to have a negative or neutral effect due to nutrient immobilisation. For instance, in general, biochar is highly useful in tropical regions or degraded soil, whereas it only has moderate effects in temperate regions. The application of biochar produced from different biomass feedstocks cannot always provide the same effect for the same soil property in less fertile soils. Thus, the application of suitable biochar to the appropriate soil type should be carefully considered when improvement in a particular soil function is desired.

The impact of biochar amendment on the chemical, physical and biological properties of soil, as well as soil health and agricultural productivity, depends upon the existing soil characteristics, such as pH levels, water retention, cation exchange capacity (CEC) – i.e. the soil’s ability to absorb positively charged ions, nutrient transfer, etc. Opposite effects on physical properties of soil, such as water retention, compactibility, and air transport properties, are reported for biochar application to coarse-grained and fine-grained soil due to the fundamental differences in structure-forming potential (leading to macro-porosity), pore-size distribution and connectivity of the pores. The advantages of biochar application on chemical properties of the soil, for example, get influenced by the soil’s original buffering capacity, surface charge type and density, amount and stability of soil organic matter. Thus, the effects are always specific to the soil and the application site.

State of the science regarding biochar and future scope of work

The type of biomass which biochar has been produced from is another important aspect. For example, it should not be gained from sewage sludge and placed in the soil, as the heavy metals from the sewage sludge can contaminate the soil and lead to food contamination. Furthermore, some researchers report an increase in methane (CH4) and nitrous oxide (N2O) emissions from the soil during the crop cycle, especially for paddy where the water logging creates less aerobic conditions, leading to an increase in these emissions. However, there is a need for more scientific evidence here.

Research and development in biochar has been vast. Its advantages are obvious. It is a cheap, sustainable, easy to prepare biomaterial which can also be produced by farmers locally. Its applications related to adsorption have been primarily focused upon in industries, and the same adsorptive properties can also play a vital role in soil health improvement for agriculture by holding more nutrients, preventing leaching and increasing water retention. Biochar production through the pyrolysis process is also a sustainable process which produces bio-oil and synthesis gas (a fuel gas mixture). This bio-oil can be utilised for running engines whereas part of the gases can be used during the pyrolysis of biomass.

There are many laboratory-based experimental studies that indicate positive effects of biochar on soil. But there are also studies which have indicated that biochar amendment effects on soil properties and crop productivity faded with time. Hence, there is a need for well-designed long term (>one year) field trials on varied representative soils to facilitate useful recommendations to farmers and researchers on the suitable biomass feedstocks, biochar production parameters, biochar application rates and appropriate soil types.

Komalkant Adlak is currently pursuing his PhD from IIT Delhi on ”Utilization of biochar for enhanced biogas separation and biomethane storage”.