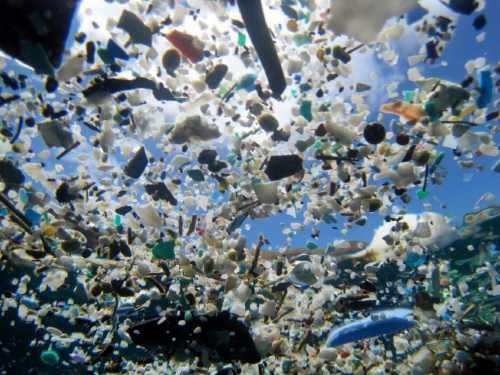 Vast quantities of discards clog up landfill sites and natural environments around the world.
Photo: www.mkg-hamburg.de

Bacteria found that can break down plastic

According to a group of biologists in Japan, a new-found species of bacteria, named Ideonella sakaiensis 201-F6, breaks down plastic by using two enzymes to hydrolyse polyethylene terephthalate, or PET.

Polyethylene terephthalate (PET ) is a condensation polymer used in plastic that is highly resistant to biodegradation. It is industrially produced by either terephthalic acid or dimethyl terephthalate with ethylene glycol. To date, very few species of fungi – but no bacteria – have been found to break down this polymer.

A Japanese research team, led by Dr. Kohei Oda from the Kyoto Institute of Technology and Dr. Kenji Miyamoto from Keio University, collected 250 samples of PET debris and screened for bacterial candidates that depend on PET film as a primary source of carbon for growth.

They identified Ideonella sakaiensis 201-F6, which could nearly completely degrade a thin film of PET after six weeks at a temperature of 30 degrees Celsius. Further investigation identified an enzyme, ISF6_4831, which works with water to break down PET into an intermediate substance, which is then further broken down by a second enzyme, ISF6_0224.

“By screening natural microbial communities exposed to PET in the environment, we isolated a novel bacterium, Ideonella sakaiensis 201-F6, that is able to use PET as its major energy and carbon source,” the scientists explained. “When grown on PET, this strain produces two enzymes capable of hydrolysing PET and the reaction intermediate, mono(2-hydroxyethyl) terephthalic acid.”

“Both enzymes are required to enzymatically convert PET efficiently into its two environmentally benign monomers, terephthalic acid and ethylene glycol.” Remarkably, ISF6_4831 and ISF6_0224 seem to be highly unique in their function compared to the closest related known enzymes of other bacteria, raising questions of how these plastic-eating bacteria evolved.

The team hopes the discovery will lead to new ways of breaking down plastic, using either the bacteria themselves, or the two enzymes they use for the job. New ways of breaking down PET are sorely needed – vast quantities of discards clog up landfill sites and natural environments around the world. In 2013, 56 million tonnes of PET were manufactured – about a quarter of all plastics produced that year – but only 2.2 million tonnes were recycled, the team says.

More information:
The discovery is reported in the journal Science.