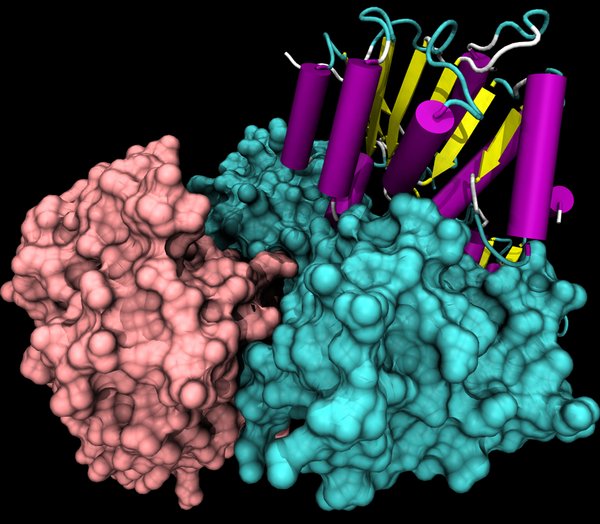 The enzyme eIF4A is inhibited by the silvestrol extracted from the Aglaia plant.
Photo: © Ayacop, Commons

Biochemists and virologists at Marburg University in Germany successfully tested an inhibitor of the African Ebola virus produced from a plant substance.

A plant substance works against the Ebola virus. This is the finding presented by scientists from Marburg and Giessen in Germany in a current publication. The natural substance silvestrol reduces the number of pathogens in attacked cells, according to the authors working with Marburg biologist Prof. Arnold Grünweller in their report, which appeared in the latest online issue of the journal “Antiviral Research”. Production of virus proteins is also largely suppressed if the natural substance is used.

Dangerous pathogens like the Ebola virus use enzymes in their host cells in order to produce their own genetic information in proteins. Grünweller and his colleagues investigated whether the natural substance silvestrol inhibits a cell enzyme which the Ebola virus needs to produce its own proteins.

Silvestrol is extracted from the Asiatic Mahogany plant Aglaia foveolata, and is used in cancer research to inhibit the cell’s own enzyme eIF4A. “We studied under the strictest security conditions what effect silvestrol has on human cells infected with the Ebola virus,” Grünweller explains.

The result: silvestrol results in a sharp decrease in the virus concentration in cells. Viral proteins disappear almost completely. “Our experiments show that the Ebola virus depends on the host cell’s eIF4A enzyme to produce its own proteins. This makes it virtually impossible to evade the antiviral effect of silvestrol by mutations in its own genome,” Grünweller noted.

The effective silvestrol concentration proved nontoxic to human cells, and the authors accordingly see silvestrol as a highly promising means to push back against an Ebola virus infection. This, the scientists stress, increases the chance of developing an effective immune response to the virus.
As the scientists observed, silvestrol’s inhibiting effect is also evident if the substance is used against other viruses which need eIF4A to produce their virus proteins. “It’s a matter for future studies to confirm any broadband effect of silvestrol,” Grünweller says.

Prof. Arnold Grünweller and the research team carried out the silvestrol experiments at the Marburger Institut für Virologie, which is one of the few European laboratories with the highest security rating.
The German Research Foundation supported the scientific work  through the special research area ‘RNA viruses: metabolism of viral RNA, immune response of host cells and viral pathogenesis’ at Marburg and Giessen universities.