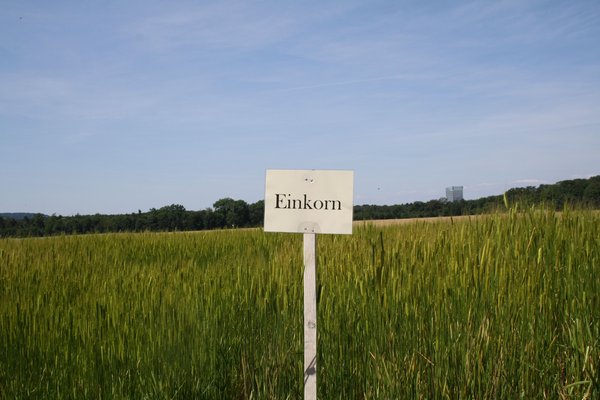 Small spelt – golden corn, as one could sum up the results of a scientific study conducted at the University of Hohenheim that took a closer look at ancient wheat varieties; for small spelt produces more lutein, which protects the eyes, than conventional wheat varieties.

The human eye requires the carotinoid lutein as an UV and blue light filter and as a highly effective antioxidant to protect the retina from high-energy radiation. Since the body cannot produce carotinoids on its own, they have to be taken up via food, above all green leaf vegetables. A study recently published in the Journal of Agricultural and Food Chemistry and conducted by the University of Hohenheim in Germany has now demonstrated that the ancient wheat species of small spelt contains a high concentration of lutein. The result is that regular consumption of bread baked with ancient wheat could make a considerable contribution to improved eye function.

“Lutein is a protective substance needed for the eye’s macula – the area of sharp vision,” says Jochen Ziegler, a food technologist at the University of Hohenheim. “Above all age-related macular degeneration (AMD), i.e. going blind among old people, can be prevented by an increased intake of lutein.” The substance is contained not only in spinach and kale but also, and in higher concentration, in the ancient wheat species emmer, spelt and, in particular, small spelt, the expert explains.

In the context of the study, the State Plant Breeding Institute at the University of Hohenheim grew 15 varieties each of the five wheat species durum wheat, common wheat, small spelt, emmer and spelt at five different locations that were subsequently analysed at the Chair of Technology and Analytics of Plant Food.

“Unlike rice, (Golden Rice), where carotinoids have been introduced in a staple food via genetic engineering, we are taking advantage of the natural occurrence of lutein in ancient wheat species,” explains Reinhold Carle, who heads the analytical study. “In order to test the heredity of lutein content, it was important to plant representatives of these species in different locations.”

“The high lutein content in small spelt also gives those people the opportunity to have a healthy diet who are not eating a sufficient amount of vegetables that are rich in lutein,” says Carle. “People could have a healthier diet by switching from modern common wheat varieties to the ancient wheat varieties, which have been neglected for a long time.”

Simple to cultivate, but a lower yield

But why aren’t the ancient wheat varieties suitable for mass production? “They are simple to grow, because they need less spraying with pesticides and less fertiliser,” explains Friedrich Longin, an expert on small spelt, emmer and spelt at the University of Hohenheim. In this respect, Longin explains, the ancient varieties are an attractive cultivated species. However, the scientist explains, there are disadvantages, too, especially during the harvest. “In ancient wheat varieties, the grains are still in their husks. This is not the case with modern wheat species, where the process of splitting the grains from the husks is not needed.”

As Longin further explains, small spelt has a lower yield than common wheat. And the flour is not pure white but has a more yellowish colour. Longin explains that common wheat in particular has established itself because of its high yield. Cultivation has been oriented on the yield and on good baking properties, but not on the nutrient content.

Suitability for cultivation in the tropics and subtropics

Regarding the aspect of whether small spelt is suitable for growing in the tropics and subtropics, Carle explains that just like the other ancient wheat varieties of spelt and emmer, small spelt is simpler to cultivate and more hardy than the more widespread common wheat because the use of fertilisers, pesticides and herbicides can be significantly reduced. Also, small spelt can be grown in barren locations. However, the ancient species, especially small spelt, supply a significantly lower yield, Carle cautions.

Carle believes that from a nutrition physiology angle, small spelt could certainly also make a significant contribution to lutein supply; however, he adds that lutein is not a pro-vitamin A active carotenoid and therefore does not represent a solution regarding vitamin A deficiency, which is very widespread in developing countries and figures among the hidden hunger issues.

So far, the scientific study has been in progress for two years, and initial results have now been published in the Journal of Agricultural and Food Chemistry.