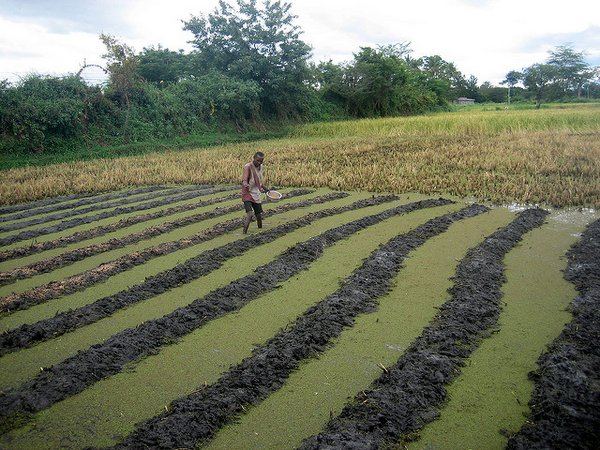 The areas in the African countries affected by parasitic weeds are home to some of the world’s poorest farmers.
Photo: © Erik Cleves Kristensen/ flickr.com

An international team of researchers representing the Africa Rice Center (AfricaRice), the International Rice Research Institute (IRRI) and Wageningen University, has raised alarm over the enormous economic impact parasitic weeds have on rice production in Africa, threatening the food security and livelihoods of millions of resource-poor rice farmers and consumers in the Region.

Smallholder farmers on the African continent are losing half a million tons of rice worth about USD 200 million every year because of parasitic weeds. This is roughly equivalent to the annual rice consumption of Liberia, a low-income country which is highly dependent on rice imports.
Parasitic weeds are among the most destructive and problematic weeds to control. “When these plants invade food crops, they turn into ferocious weeds,” said Dr Jonne Rodenburg, Agronomist at AfricaRice and co-author of the study “Parasitic weed incidence and related economic losses in rice in Africa.”  The most important parasitic weed species in rice are Striga asiatica, S. aspera, S. hermonthica and Rhamphicarpa fistulosa. They are all endemic to Africa and can also parasitise other cereal crops like maize, sorghum and millet.

The team of researchers from the Africa Rice Center (AfricaRice), the International Rice Research Institute (IRRI) and Wageningen University reveal that these parasitic weeds, which survive by siphoning off water and nutrients from host crops, have invaded 1.34 million hectares of rainfed rice in Africa, affecting an estimated 950,000 rural households. The increasingly severe incidence of these weeds is caused by the intensification of agricultural production and climate change.
The areas affected by parasitic weeds are home to some of the world’s poorest farmers. Studies by AfricaRice and partners have shown that parasitic weeds seem to predominantly impact on women farmers in Africa, who are often forced to grow rice on the most marginal and parasitic-weed-infested plots.

Parasitic weeds threaten rice production in at least 28 countries in Africa with rainfed rice systems. The most affected countries are Burkina Faso, Cameroon, Côte d’Ivoire, Guinea, Madagascar, Mali, Nigeria, Sierra Leone, Tanzania and Uganda.
The researchers warn that these parasites are spreading fast in rainfed rice areas and if nothing is done to stop them in their tracks, the damage will increase by about 30 million USD a year.
Rice is the second most important source of calories in Africa. It is also critical for smallholder incomes. Demand for rice is growing at a rate of more than 6 per cent per year – faster than for any other food staple in sub-Saharan Africa (SSA), because of changes in consumer preferences and urbanisation.
Until now, there has been little information on the regional spread and economic importance of parasitic weeds in rice in Africa. “We have presented in this article best-bet estimates on the distribution as well as the agronomic and economic impact of parasitic weeds in rice in Africa,” explained Dr Rodenburg. “In fact, this is the first multi-species, multi-country impact assessment of parasitic weeds in Africa.”

AfricaRice and its partners have been investigating and developing efficient parasitic weed management strategies that are affordable and feasible for resource-poor rice farmers. “A range of high-yielding, short-cycle, farmer-preferred rice varieties have been identified with resistance or tolerance to different species and ecotypes of Striga, as well as varieties with good defence against R. fistulosa,” said Dr Rodenburg.

He explained that growing such varieties can be combined with different agronomic measures, such as late sowing (against R. fistulosa) or early sowing (against Striga), and the use of organic soil fertility amendments. Growing a leguminous cover crop such as Stylosanthes guianensis and following a zero-tillage approach also contribute to effective control of Striga, as demonstrated by agronomic experiments conducted by AfricaRice and its partners.

To study the institutional and socio-economic constraints underlying the challenge posed by the parasitic weeds, and to raise awareness and improve communication on efficient management strategies, AfricaRice and its partners have brought together stakeholders, including national research institutes, extension services, crop protection services and private-sector representatives in workshops in East and West Africa.