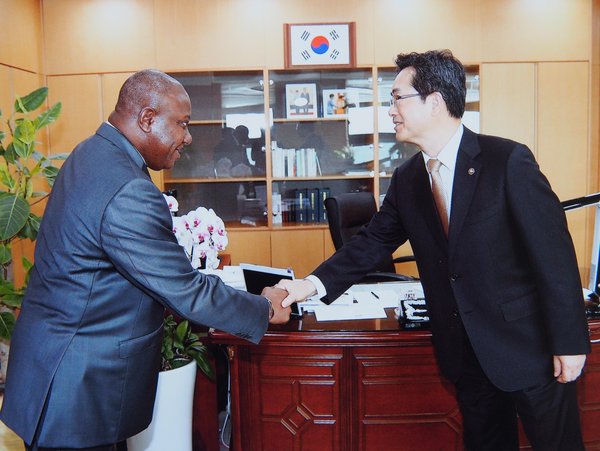 In an enhanced strategic partnership under the Korea-Africa Food and Agriculture Cooperation Initiative (KAFACI) a new generation of productive and stress-tolerant rice varieties will be developed and the African rice gene pool will be broadened.

The Rural Development Administration (RDA) of the Republic of Korea and the Africa Rice Center (AfricaRice) have entered into a strategic partnership under the Korea-Africa Food and
Agriculture Cooperation Initiative (KAFACI) to accelerate the development of a new generation of productive and stress-tolerant rice varieties to meet the pressing needs of rice farmers and consumers in Africa. KAFACI aims to contribute to food security and enhanced economic growth in Africa through modernised agriculture by drawing on the experience, knowledge and resources of the Republic of Korea.

The partnership will broaden the African rice gene pool with high yield and quality traits from Korean rice germplasm. It will also enhance African rice breeding capacity by training national rice breeders, particularly in the application of another culture, which has high potential to increase rice yields in Africa. For this, facilities for another-culture work will be set up at the regional training centre of AfricaRice located at its regional station in Saint Louis, Senegal.

The partnership will support seed multiplication and dissemination efforts for newly released improved rice varieties, which will contribute to strengthening national seed systems. It will also help establish a strong research network of African and Korean scientists working on rice breeding for Africa.

“This is a momentous achievement, which will allow AfricaRice to invigorate its effort to reach the common objectives of improving food security and reducing poverty in Africa, through advances in rice research and training of rice breeders,” stated Dr Roy-Macauley, Director General of AfricaRice on the occasion of the signature of the Memorandum of Understanding in late 2016

African farmers mainly grow rice under rainfed conditions, obtaining yields of around 2 tons per hectare. This is much lower than average rice yields world-wide at around 4 tons per hectare, with the result that much of the rice consumed in Africa is imported from Asia. Rice self-sufficiency objectives are being pursued by many African countries as a means to achieve food security and reduce the rice import bill.

The Republic of Korea has rich resources of germplasm known as Tongil-type rice that has a yield potential of 6 to 8 tons per hectare of milled rice. The high-yielding Tongil variety, derived from indica-japonica cross, sparked the Green Revolution in the Republic of Korea, transforming the country from a rice importer to a self-sufficient producer in the 1970s.

The new RDA-AfricaRice initiative will build on the success of a joint pilot project that evaluated Korean rice breeding lines at the AfricaRice regional research station in Saint Louis in Senegal in 2015/2016. Some of the lines have been nominated for multi-environment trials through the Africa-wide Rice Breeding Task Force. Several improved varieties obtained from crosses between elite Korean and African varieties are currently being tested.