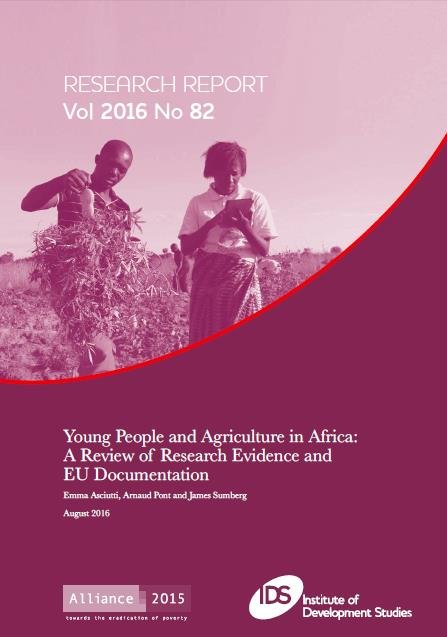 Young People and Agriculture in Africa

The combination of agriculture and entrepreneurship is the key to addressing the youth employment challenge. This is particularly true for Africa, perceives new report.

According to a report published in September 2016 by the Institute of Development Studies (IDS) for Alliance 2015; beyond the area of education, young people do not figure prominently in the EU’s policy and programmes in Malawi, Ethiopia and Kenya. In as much as some programmes seek to strengthen rural institutions or reform land tenure regimes, young people are implicated along with other elements of the rural population.

The report, ''Young People and Agriculture in Africa: A Review of Research Evidence and EU Documentation’’, examines the logic upon which youth-specific agricultural initiatives are based and the degree to which that logic is supported by evidence.

This report presents the results of a desk-based study to assess the available research evidence in relation to African young people’s engagement with agriculture, and to analyse how this evidence is reflected in current European Union (EU) policy and programming in Malawi, Ethiopia and Kenya, three of the 89 countries in which Alliance2015 members work.
The authors of the report note that the relatively strong evidence around the research – technology - productivity nexus; and issues around access to land suggest that they should continue to be a central focus, even though they cannot (and should not) be framed or justified as a ‘youthspecific’ policy or programme focus.

The report aims to stimulate constructive dialogue and debate with the EU and member states in Europe and in countries in Africa. It will be important perceives the report to reflect on whether, how and in what situations the EU’s strong orientation toward economic growth, market-based approaches and broadly applicable principles and frameworks are appropriate in relation to the structural transformation agenda.