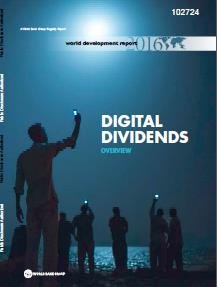 For digital technologies to benefit everyone everywhere, WDR 2016 says there is an urgent need for governments to close the remaining digital divide, especially in internet access.

According to the World Development Report 2016: Digital Dividends, globally 60 per cent of the world’s population has no access to the internet and only around 15 per cent can afford access to broadband internet. Mobile phones, reaching almost four-fifths of the world’s people, provide the main form of internet access in developing countries.

The report published by world bank in January 2016, perceives that while the internet can be a force for development, especially for the poor in developing countries, its access and affordability still remains an illusion. Worldwide, nearly 21 per cent of households in the bottom 40 per cent of their countries’ income distribution don’t have access to a mobile phone, and 71 per cent don’t have access to the internet.

While acknowledging  the profound effects internet impacts on the lives of billions of people the WDR 2016, also explores the impact internet has on economic growth, on social and economic opportunities, and on the efficiency of public service delivery.

WDR 2016 takes a critical look at the factors that have allowed some businesses, people, and governments to benefit greatly from the internet, while others have not been able to reap similar benefits. In order to help countries better leverage the internet for development, the report identifies the policy reforms in the information and communication technology (ICT) sectors, in the complementary sectors and in the development community.

The WDR 2016 recommends that in order to get the most out of the digital revolution, countries also need to work on the “analog complements”, by strengthening regulations that ensure competition among businesses, by adapting workers’ skills to the demands of the new economy, and by ensuring that institutions are accountable.