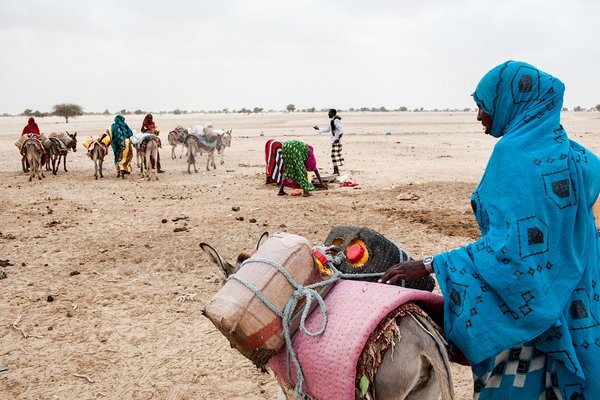 A woman in Somalia on the way to fetch water. The country has been hit by an extreme drought, and many people don’t know what to live on.
Photo: © Welthungerhilfe

We are living in times of multiple crises. Given climate change, the Covid-19 pandemic and the war in Ukraine, Welthungerhilfe is warning of rising numbers of hunger victims.

“Welthungerhilfe looks back on a year in which the world-wide food situation has once again dramatically worsened,” said the organisation’s President, Marlehn Thieme, on the occasion of presenting its Annual Report. The latest hunger statistics were “sounding the alarm for the whole world”. A recent UN report clearly demonstrates that a trend which already became apparent before the Covid-19 pandemic and ahead of the Ukraine war has continued and that the numbers of those going hungry are on the increase once again. At the moment, the UN states, up to 828 million people are chronically undernourished. According to Welthungerhilfe, the most important drivers of hunger include wars and conflicts, as well as the impacts of climate change and the Covid-19 pandemic.

The war against Ukraine is exacerbating the already dramatic food situation since Ukraine is an important wheat exporter. This is resulting in soaring food and transport prices and is a problem for people, the organisation says. It states that already in 2021, food prices world-wide had risen by up to 28 per cent.

Currently, the situation is especially dramatic in Yemen, in Afghanistan and in South Sudan, but also in Madagascar and the countries of East Africa, where severe droughts are demonstrating the disastrous impacts of climate change. “We are receiving desperate calls for help from all project countries. From Afghanistan to Zimbabwe, people are struggling with price hikes for bread, grain or fruit of up to 60 per cent. Those already among the poorest of the poor, who have least contributed to the crisis, are suffering most of all,” says Thieme.

According to the organisation, the international community has failed to respond to previous crises, such as the food price crisis of 2011, and to make the food systems more crisis-resilient, sustainable and fair, both at regional and global level. Welthungerhilfe welcomes the pledges given at the G7 Summit in Elmau/Germany in principle. “But the financial and political commitments are still not enough to get rid of hunger. Instead of the approved once-off 4.5 billion US$, the international community requires an additional 14 billion US$ up to 2030 in order to fulfil the G7’s pledge of getting 500 million people out of hunger,” Thieme emphasises.

It is not only the war in Ukraine which has aggravated the situation. The large number of other military conflicts is also contributing to rising numbers of people going hungry. Welthungerhilfe pointed to the example of the desperate situation which families in Ethiopia are in owing to the impacts of the war in Tigray Province, where millions of goats and cattle had already died, fields had withered, wells had dried up and water sources had been destroyed, ruining millions of people’s livelihoods.

Climate change is a further crucial factor which causes the numbers of people going hungry to rise. The situation has above all become worse in the Horn of Africa, where, according to the organisation, 17 million people do not have enough to eat. Somalia, Kenya and Ethiopia are experiencing their worst drought in 40 years. Here, the drought periods are turning into permanent times of crisis because the rainy seasons are increasingly failing to develop and people are no longer able to make a living.

“In many countries, people are struggling to cope with the impacts of different, overlapping crises, and hunger is used as a weapon on purpose. We have to act swiftly and determinedly – both with short-term survival aid and more money,” emphasises Welthungerhilfe General Secretary Mathias Mogge.