The INDCs assessed in this Emissions Gap report signal a breakthrough in terms of international efforts to bend the curve of future emissions. 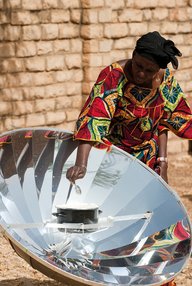 The sixth UNEP Emissions Gap Report released in November 2015, provides a scientific assessment of the impacts of the submitted Intended Nationally Determined Contributions (INDCs) on anthropogenic emissions of greenhouse gases.

The Emissions Gap Report is an authoritative assessment undertaken by a team of leading scientists and modelling experts from around the world. It presents an assessment of the 119 Intended Nationally Determined Contributions (INDCs) submitted the UN Framework Convention on Climate Change (UNFCCC).

Like in the previous reports, the report released in November 2015 compares the resulting emission level in 2030 with what science tells us is required to be on track towards the agreed political target of a temperature increase no more than 2°C by the end of the century.

This indicates that efforts to tackle climate change, including those taken before the Paris agreement and full implementation of the INDCs, could cut up to 11 GtCO2e from projected emissions in 2030.  This is however around half of the total required to reach the global emission level of 42 GtCO2e in 2030 consistent with having a likely chance (>66 percent) of staying below the 2°C target in 2100.

According to the report, the challenge is to bend the emissions trajectory down as soon as possible to ensure that the net zero emissions goal in 2060-2075 is within reach.
The report also provides data for the aspirational target of an increase below 1.5°C. In addition the report analyzes selected areas where enhanced action can be taken and how these actions can be accelerated and scaled up to close the ‘gap’.If all INDCs are fully implemented, the 2030 emissions gap would still be 12 GtCO2e, putting the world on track to a temperature rise of around 3°C by 2100, and bringing significant climate impacts.

However this scenario assumes that nations would not review and further accelerate efforts in subsequent years – i.e. in 2025 or 2030.The report also shows the uncertainties that exist for different scenarios based on the best available scientific evidence.
The report also recommends early action on climate to keep costs as low as possible and avoid deeper and more challenging cuts later.