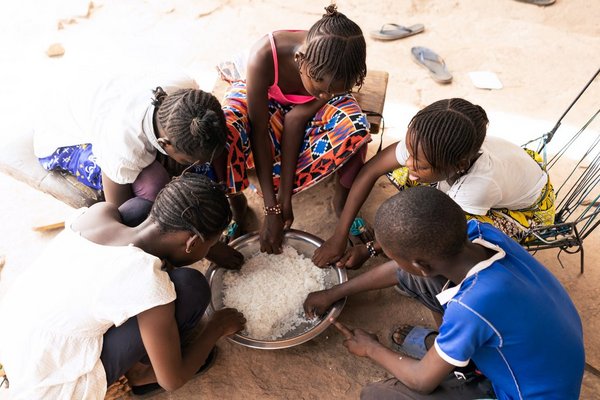 Global food prices more than doubled since February 2020, but they have rocketed even further since the start of the war in Ukraine. This has made basic foodstuffs unaffordable for the 1.8 billion people in the world who live under the poverty line and have to survive on less than USD 3.20 per day. But the war in Ukraine is not the only cause of this food crisis. Long-term measures to improve worldwide food security are necessary.

The 20-year trend of significant progress in the battle against hunger has recently gone into reverse in 20 to 30 countries, according to the UN Food and Agriculture Organization (FAO). The number of people affected by severe food security fell from 811 million in 2005 to 607 million in 2014, offering grounds for hope, but the figure has since crept upwards to 650 million in 2019 and 811 million in 2020.

The FAO fears that this year will be much worse. The food crisis is not a new phenomenon. There are multiple reasons for this, including fragile food supply chains, bad governance, conflicts and climate change. The pandemic and the war in Ukraine are just the newest ingredients in this extremely complex mixture.

Hunger and malnourishment are increasing, even though there is no question of a global food shortage since in principle there is more than enough food available. According to the FAO database, wheat production rose between 2000 and 2020 from 585 to 761 million tons, of which just under 200 million tons were traded on world markets in 2020. But the price of wheat still continues to climb. There are a range of explanations for this.

The global food system is characterised by a close intertwining of exporters, importers and companies dealing in grain, seed and agrochemicals, as well as the ports that handle the transport of foodstuffs. It only takes one disturbance for this system to become shaky – a disturbance like rising energy costs, export restrictions and/ or blockades, the monopolistic position of a few large companies and, last but not least, speculation.

Almost one-third of the wheat traded on the world market comes from Russia and Ukraine, along with just under two-thirds of the sunflower oil and 15 per cent of the world’s maize supply. The war is now impeding exports of these commodities. Russia primarily exports to “friendly states,” while other countries are finding that imports have become uncertain and expensive. Grain silos are being bombed in Ukraine and its ports blockaded, while maritime channels are mined and important facilities have been destroyed, preventing ships from sailing. Transport has been brought to a virtual standstill, with only small volumes of last year’s harvest exported by rail, although this alternative route is made difficult by different gauge tracks and complicated bureaucracy.

It is already assumed that Ukrainian exports will be 30 per cent lower than before, but if the armed conflict continues, the drop could reach 60 per cent. Spring sowing operations have been largely completed, though the area sown is 22 per cent down from 2021 due to the fighting and shortages of labor, machines and fuel.

Expectations are that 14.2 million hectares have been planted with spring crops this year, compared to 16.9 million hectares the previous year, which points to a sizeable reduction in the expected harvest. Additionally, over 10 million tons of wheat are still in storage as the winter wheat harvest looms in July. If the grain in the silos is not transported and processed in the next few weeks, it will soon be spoiled and the next crop, estimated at 18.2 million tons, will not be able to be stored in full.

There is no easing of the high price levels in sight. The FAO Food Price Index (FFPI), which tracks the prices of the world’s major staple crops, hit a new record high in March 2022 and has dipped only slightly since then. The price of grain rose by about 70 per cent between March 2020 and March 2022. Since then it has again fallen back (temporarily?) to the level at the end of February. Market observers attribute this to the fact that Egypt wants to reduce its wheat imports by 500,000 tons per year. The price of edible oils has reached astronomical heights. The FFPI has doubled in the past 30 years. The impact of spiralling food prices is being felt worldwide.

Households in many countries in the Global South spend a majority of their income on food. At current prices, people in places like Burkina Faso, Madagascar, Nepal and Myanmar have to devote well over half of their income to buying food (the comparative figure is only 9 per cent in Switzerland) leaving hardly any money left over for rent, healthcare and the cost of their children’s schooling. An aggravating factor in the Global South is that few countries have a social security system to protect people from crises like the present one.

The higher prices will be felt particularly in Africa, which sourced over 40 per cent of its wheat from Ukraine and Russia up until the outbreak of the war. The impact will be most immediate in North Africa and the Middle East along the Mediterranean coast, since these countries are especially reliant on wheat imports from Russia and Ukraine. What’s more, the rising cost of fuel is preventing farming families from getting their products to market and hence to consumers. Increasing seed and fertilizer prices are threatening the livelihoods of farmers who need them and, without fertilizer, yields are plunging, exacerbating poverty and hunger.

One crisis fuels another

These shortages and extreme price rises come at a time when the worldwide situation is already tense. Even before the Ukraine crisis, there were famines in Afghanistan, Ethiopia, Yemen, South Sudan, north-eastern Nigeria and Somalia. Rising food prices are having terrible consequences in these countries, but not only there.

Luca Russo, Team Leader in Emergency and Resilience at the FAO, warns that “the increased price of wheat and fuel means that with the same money we can deliver much less assistance.” Also, there are many people the FAO simply cannot reach because they live in a conflict zone. The World Food Programme (WFP) has already had to cut back on its emergency rations.

The pandemic interrupted global supply chains, contributed to a rise in unemployment and ate into many people’s financial reserves. Unresolved conflicts in Yemen, Afghanistan and Mali have led to greater hunger, and so have plagues of locusts and droughts in East Africa. People in the Horn of Africa are suffering from one of the worst dry periods in decades as a result of climate change. Well over 40 million people in Ethiopia, Somalia and South Sudan already do not have enough to eat.

These developments add further explosive ingredients to a global food situation that has been aggravated by a long series of crises, especially in the poorest countries. If the Ukraine war goes on and on, Luca Russo warns, 2023 will be a very dangerous year, especially for countries dependent on wheat imports from Ukraine and Russia, and for all countries in which wheat and maize form part of the staple diet.

Urgent measures to be taken

It will take the combined efforts of the state and members of the business community and civil society under the aegis of the United Nations and its expert organisations to address and alleviate this complex food crisis and its many impacts.

The chosen measures must have a short-term effect but be implemented with the long term in mind so that they do not cause any harm. Knee-jerk political responses have the potential to worsen price volatility and global shortages. The soaring food prices of 2007-8 and 2010-12 and more recent experiences during the coronavirus pandemic have demonstrated that measures such as export restrictions or the hoarding of foodstuffs can have dramatic negative consequences for feeding the world.

What’s needed now are internationally agreed-upon measures designed to overcome the food crisis on the basis of the 2030 Agenda and its sustainable development goals (SDGs). This is the context in which Helvetas is appealing to Swiss politicians, state officials, the private sector and civil society to commit themselves to a credible and evidence-based approach to development aid and adopt the following demands:

Findings in Helvetas’ partner countries
(Survey in May 2022)

Food prices were rising even before the Ukraine war, particularly for wheat, but also for edible oils. Hardest hit were poor people in cities who do not grow their own food.

Processing foodstuffs such as rice and maize has become more expensive, and high transport costs have reduced the incomes of farming families. At the same time, interest rates are rising on the loans they depend on to be able to farm.

Productivity is falling as an effect of rising prices for imported fertilisers. Some smallholder farmers are abandoning production altogether, further exacerbating the food crisis.

A drop in remittances is increasing people’s hardship, and migrants returning to their countries have very few prospects.

Countries in the Western Balkans have lost major markets following the imposition of sanctions on Russia and the war in Ukraine.

Various governments are subsidising wheat products and fuel, in an effort to calm social and political tensions