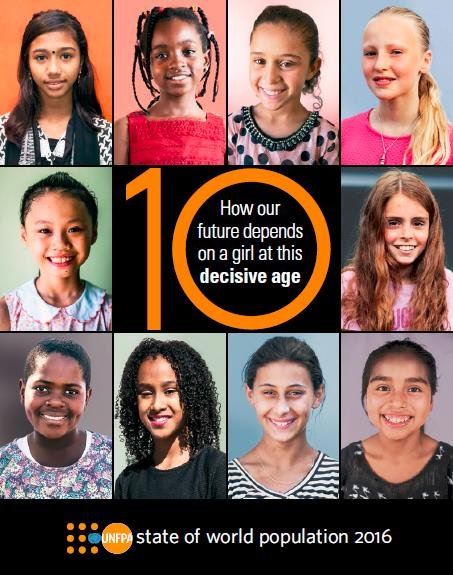 The State of World Population 2016

Will the 10-year-olds of today be healthier, free of extreme poverty, and full and equal participants in their communities and nations 15 years from now? asks this UNFPA report.

The United Nations Population Fund (UNFPA) annual report released in October 2016 perceives that harmful practices such as forced marriages, child labour, female genital mutilation and other practices continue to undermine girls’ health and rights, thus threaten the world’s ambitious development agenda.
These practices not only harm girls and violate their human rights, but also undermine their role in achieving the United Nations Sustainable Development Goals for eliminating poverty, achieving inclusive economic growth, and improving health and well-being for all by 2030, when they will be young adults entering the labour force, notes report.

Of particular importance are girls, who are systematically disadvantaged at the global level in a number of ways: lower participation in and completion of formal schooling, particularly at the secondary and tertiary levels; poorer health, both physical and mental; lower engagement in formal employment; fewer legal rights; and a far greater likelihood of having their childhoods interrupted by marriage and childbearing