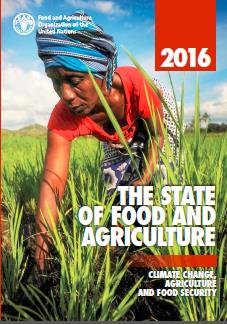 The State of Food and Agriculture 2016

The pledge to eradicate hunger and poverty must go hand in hand with rapid transformations of farming and food systems to cope with a warmer world, says FAO a new report.

The State of Food and Agriculture 2016, perceives that a "business as usual" approach could put millions more people at risk of hunger compared to a future without climate change. Most affected would be populations in poor areas in sub-Saharan Africa and South and Southeast Asia, especially those who rely on agriculture for their livelihoods. Future food security in many countries will worsen if no action is taken today.

According to the report released in October 2016, success in transforming food and agriculture systems will largely depend on urgently supporting smallholders in adapting to climate change. Developing countries are home to around half a billion smallholder farm families who produce food and other agricultural products in greatly varying agro-ecological and socio-economic conditions. Solutions have to be tailored to those conditions; there is no one-size-fits-all fix.

The FAO report describes alternative, economically viable ways of helping smallholders to adapt and making the livelihoods of rural populations - often the most exposed to the downside risks of climate change - more resilient.
Moreover, agriculture, including forestry, fisheries and livestock production, generate around a fifth of the world's greenhouse gas emissions. Agriculture must both contribute more to combating climate change while bracing to overcome its impacts, notes report.