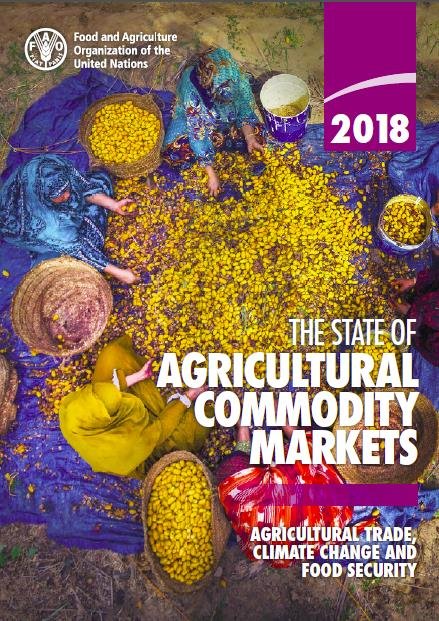 The State of Agricultural Commodity Markets 2018

Global food markets can contribute to climate-change response efforts and to fighting food insecurity, according to a report published by FAO. For this, trade policies are needed that promote well-functioning global markets, combined with climate-smart domestic measures, investments and social protection schemes.

International trade in agricultural products will make an increasingly important contribution to feeding the planet, according to the report The State of Agricultural Commodity Markets 2018 – Agricultural Trade, Climate Change and Food Security published by the Food and Agriculture Organization of the United Nations (FAO) in September 2018.

This is because climate change will affect global agriculture unevenly, improving production conditions in some places while negatively affecting others. Food production in countries in low latitudes will be hardest hit, while regions with temperate climates could see positive impacts as warmer weather lifts agricultural output, the report notes.

To meet this challenge, international trade rules established under the auspices of the World Trade Organization (WTO) and newer mechanisms created under the Paris Agreement aimed at responding to climate change can be mutually supportive, argues the report. To achieve this, national agricultural and trade policies may need to be readjusted to help transform the global marketplace into a pillar of food security and a tool for climate-change adaptation.

The report also provides an overview of the international agriculture trading system in recent years. While fast agricultural trade growth between 2000 and 2008 gave way to contractions during 2009-2012 and then to sluggish growth ever since, the bigger picture is that in value terms agricultural trade grew significantly between 2000 and 2016: From USD 570 billion to USD 1.6 trillion. According to the report, much of this was driven by economic expansion in China as well as increased global demand for biofuels.

Notably, the profile of emerging economies in global agricultural trade has greatly increased, with rising per capita incomes and reduced poverty levels. This has boosted food consumption and imports and led to gains in agricultural productivity, driving up food exports not only to markets in the industrialised world but also to other countries in the Global South.