The role of biomass in the SDGs 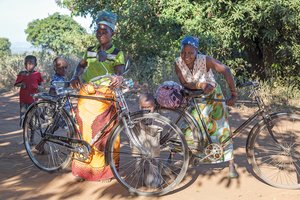 In 2005, the world-wide biomass harvest amounted to an estimated 13 billion tons, 82 per cent of which was used for food and feed, 11 per cent for energy purposes and 7 per cent as biomaterial. National bioeconomy strategies are causing the demand for biomass for energy and industrial use to rise, and competition for resources and land to grow biomass is going to increase, also with a view to a growing world population. Even if conservative estimates are taken as a base, the United Nations Environment Programme (UNEP) reckons with a demand for an additional area of at least 123 million hectares by 2050 in order to cover the growing demand.

The key role of biomass also becomes apparent in several of the Sustainable Development Goals (SDGs), which are to be adopted by the community of states in September 2015. The study “The role of biomass in the Sustainable Development Goals: A reality check and governance implications” looks at the demands and challenges arising from this. It was presented by the Institute for Advanced Sustainability Studies (IASS) Potsdam/Germany during Global Soil Week 2015 in mid-April.

First of all, setting out from the various SDGs, the study demonstrates the projected land demand for food, feed, biomaterials, and bioenergy production and consumption and confronts it with the availability of land. Subsequently, the existing problems are explained that result from large-scale biomass production – at socioeconomic and at environmental level. Finally, against the background of the nexus approach, government implications for a sustainable use of biomass are presented.

In order to defuse expected conflicts over use, the IASS scientists warn against an isolated implementation of the individual SDGs. They argue that since not enough land is available world-wide to meet all estimated future production and consumption demands for biomass, in implementing the SDGs, it is important to

More information: Rural 21 edition on Bioeconomy – a future for farmers in the South?