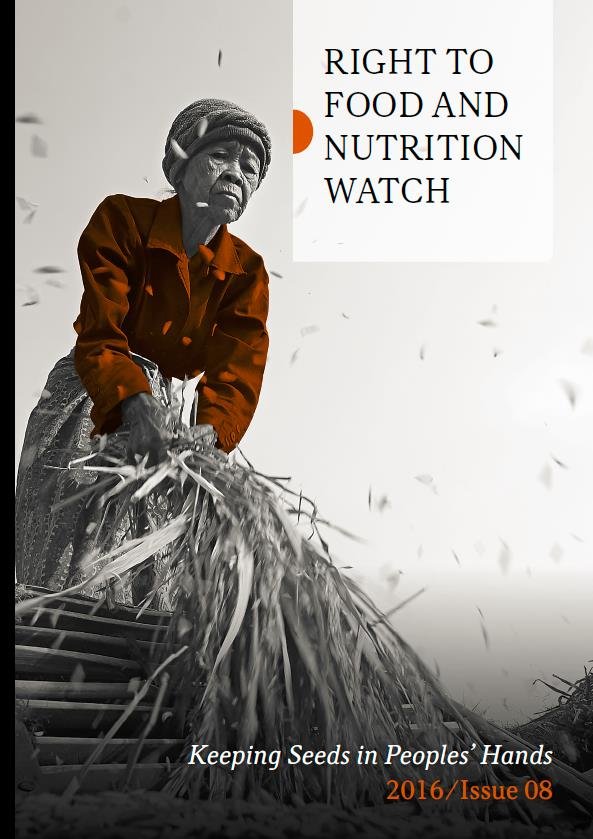 The Right to Food and Nutrition Watch 2016

This year’s edition of the Watch turns the spotlight on people-centered monitoring of the right to food and nutrition.

The Right to Food and Nutrition Watch 2016 produced by Watch Consortium explores the articulation of seeds, land and other natural resources with the human right to adequate food and nutrition. It assesses the role played by access to and control over natural resources in the realisation of the right to food and nutrition across the world. The report was published in October 2016.

According to the report, the last few decades have witnessed an increase in the privatisation and commoditisation of nature and has resulted in a multiplication of local struggles using human rights against the appropriation of agricultural biodiversity, land and water resources by corporations and states.
This year’s edition focuses on “Keeping Seeds in People’s Hands” and is divided into two main sections. The thematic section of the report explores the interconnections and interlinkages between seeds, biodiversity, and the right to food and nutrition. It also touches on ongoing global, regional and national processes shaping tenure of land, fisheries and forests, as well as on the relationship between rural and urban spaces in food systems.

The second section of the Watch is organised by geographical region and features relevant developments around the right to food and nutrition at local and national levels. It sheds light on how social movements and civil society are rising up against the challenges they face. For the first time, the Watch includes a section on the Middle East and North Africa, a region where food sovereignty is becoming a key component of grassroots advocacy.