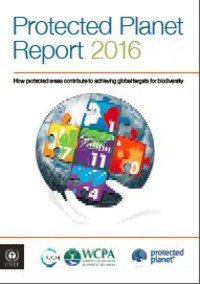 The report urges all stakeholders to do more to effectively protect the world’s most biologically diverse spaces.

While the Protected Planet Report 2016 shows that with 14.7 per cent of the Earth's land and 10 per cent of its territorial waters under protection, the world is on track to meet a major global conservation target; it also perceives that, crucial biodiversity areas are being left out. According to the report, key species and habitats are underrepresented and inadequate management is limiting the effectiveness of protected areas.
The  report by  UN Environment  and the International Union for Conservation of Nature (IUCN) was launched in September 2016.

The  2016 Protected Planet report assesses how protected areas contribute to achieving the Strategic Plan for Biodiversity and relevant targets of the Sustainable Development Goals, two of the most important environment and sustainable development commitments ever made by governments in the international fora. It highlights current research and case studies as examples of the role protected areas play in conserving biodiversity and cultural heritage.

According to scientists at IUCN and UN Environment's World Conservation Monitoring Centre, there are 202,467 protected areas today, covering almost 20 million square kilometres or 14.7 per cent of the world’s land, excluding Antarctica. That falls just short of the 17 per cent target set for 2020 by the Convention on Biological Diversity under the Aichi Biodiversity Targets.

The report provides a comprehensive assessment on the status of the global protected area network and recommends investing in protected areas to strengthen sustainable management of fisheries, control invasive species, cope with climate change and reduce harmful incentives, such as subsidies, which threaten biodiversity.