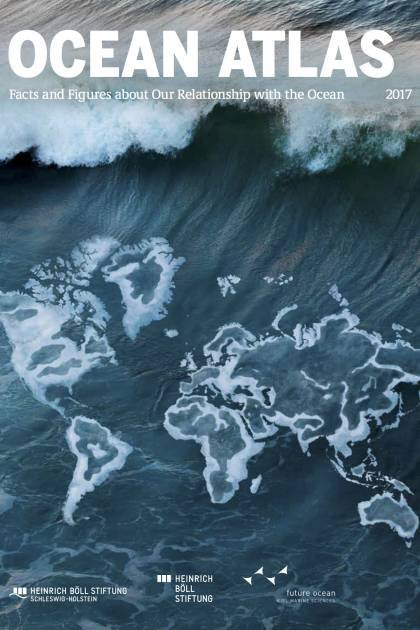 The Ocean Atlas calls for a global rethink and local action concerning our interactions with oceans and coastal regions. The atlas provides in brief lessons, graphics and illustrations of vital facts and figures an overview of the human impact on the oceans.

The Ocean Atlas was published in June 2017 by the Heinrich Böll Foundation in Berlin and Schles-wig Holstein, The Future Ocean cluster of excellence in Kiel and the monthly newspaper Le Monde Diplomatique. The group are calling for local action and global regulations to raise ocean aware-ness, inspire societal change and to protect our oceans.

With only 2 per cent of the oceans fully protected, these are some of the most poorly governed regions in the world. Pollution, overuse and climate change are causing loss of habitat and biodi-versity.

The oceans provide half of our oxygen and regulate our climate. They are one of the most valua-ble ecosystems our planet has to offer. As climate change causes them to warm up, the sea levels to rise and waters to acidify, our oceans are losing their biodiversity and productivity. Meanwhile, coastal dead zones are expanding due to loss of oxygen.

In 12 brief lessons, the atlas puts together the latest facts and figures on our impact on the oceans. It explains why we are seeing a rapid increase in acidity levels, how 90 per cent of globally ex-ploited fish populations are fully utilized, and 20 per cent of them even overfished. Plus, the atlas shows what an alternative to problematic offshore fish farms could look like, which doesn’t
rely on pesticides.

The atlas is available online and in print in German and English: The Ocean Atlas