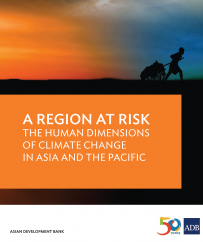 The Human Dimensions of Climate Change in Asia and the Pacific

Climate change would severely affect future growth in Asia, reverse current development gains, and degrade quality of life, according to a new report by ADB and PIK.

Unabated climate change would bring devastating consequences to countries in Asia and the Pacific, according to the report entitled A Region at Risk: The Human Dimensions of Climate Change in Asia and the Pacific published by the Asian Development Bank (ADB) and the Potsdam Institute for Climate Impact Research (PIK) in July 2017.

The report describes the scenario in Asian countries should climate change continue unabated and highlights the importance of implementing the commitments laid out in the Paris Agreement to mitigate the impact of climate change.

These increases in temperature would lead to drastic changes in the region’s weather system, agriculture and fisheries sectors, land and marine biodiversity, domestic and regional security, trade, urban development, migration and health.

More intense typhoons and tropical cyclones are expected to hit Asia and the Pacific with rising global mean temperatures. Under a business-as-usual scenario, annual precipitation is expected to increase by up to 50 per cent over most land areas in the region, although countries like Pakistan and Afghanistan may experience a decline in rainfall by 20-50 per cent.

Coastal and low-lying areas in the region will be at an increased risk of flooding. Nineteen of the 25 cities most exposed to a one-meter sea-level rise are located in the region, 7 of which are in the Philippines alone. Indonesia, however, will be the country in the region most affected by coastal flooding, with approximately 5.9 million people expected to be affected every year until 2100.

Increased vulnerability to flooding and other disasters will significantly impact the region — and the world — economically. Global flood losses are expected to increase from USD 6 billion in 2005 to USD 52 billion per year by 2050.

Climate change will also make food production in the region more difficult and production costs higher. In some countries of Southeast Asia, rice yields could decline by up to 50 per cent by 2100 if no adaptation efforts are made.

More information:A Region at Risk: The Human Dimensions of Climate Change in Asia and the Pacific