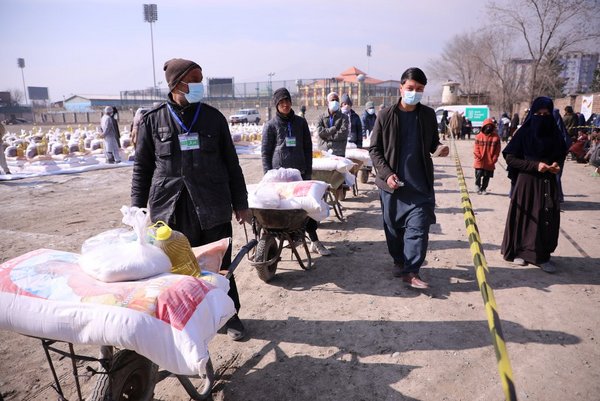 Food distribution in Kabul. Prolonged crises like in Afghanistan must not fall from view because of the current events.
Photo: © Sabawoon/Welthungerhilfe

The G7 must do more to combat hunger

The world is currently experiencing a dramatic worsening of hunger crises. The G7 countries need to raise their efforts to combat hunger if a repeat of the 2007/2008 hunger crisis is to be avoided, Welthungerhilfe and terre des hommes demand in their « Kompass 2022 ».

Development policy has to swiftly respond to the disastrous interplay between wars and conflicts, the impacts of climate change and food price hikes with concrete aid measures while simultaneously addressing their structural causes. This must not result in its neglecting prolonged humanitarian crises such as the ones in the Horn von Africa, the Sahel, Afghanistan or Yemen. This was demanded by Welthungerhilfe and the child relief organisation terre des hommes early in June, when they presented “Kompass 2022” on development policy. The “Kompass” is a further development of the annual report on the “Wirklichkeit der Entwicklungspolitik”, with which the two organisations have critically analysed German development policy since 1993.

The LDCs must not be neglected

“We must not allow a hunger crisis like the one in 2007/2008, with nearly a billion people suffering hunger, to occur again,” said Mathias Mogge, Welthungerhilfe’s General Secretary. Given the mutually aggravating crises, global food security had to assume precedence in German and international development politics – and be a key objective of all departments. For example, Germany had already pledged several years ago to allocate 0.2 per cent of its gross national product to the (LDCs). But this target had never been reached – today, the share was at 1.4 per cent of GNP. And yet it was a well-known fact that hunger and poverty were at their highest levels in conflict situations – and the LDCs were disproportionately highly affected by these. Here, it was important to link humanitarian aid, transitional aid and development cooperation more closely.

Global crises affect all people; but those suffering most among them are the ones who are especially vulnerable – people living in poverty, refugees and displaced persons, children and youths. Regarding Covid-19, for example, through lockdowns and school shutdowns introduced in response to the pandemic, millions of  children were not only denied education, but frequently also lost their only daily meal. According to a survey by terre des hommes, exploitative child labour has also increased since the onset of the pandemic. Children now account for half of the roughly 100 million people displaced world-wide, maintained Joshua Hofert, head of communication at terre des hommes. Although children’s and youths’ needs were taken more seriously than ever in development cooperation nowadays, a clear strategy to promote and involve children and a systematic child protection policy were still lacking. “We need more measures to address the root causes of violations of children’s rights,” Hofert demanded.

Obliging all countries to take action

At their summit meetings over the last few years, the seven leading industrialised nations – the G7 – adopted a wide range of declarations of intent to improve global food security. In 2015 for example, at Schloss Elmau/Germany, the G7 agreed to aim to lift 500 million people out of hunger and malnutrition by 2030. However, this initiative was never complemented by concrete financial pledges. But one thing was now clear according to Mogge. “What we are spending today on combating hunger is not enough. We need additional money, and we need the efforts of all countries, also of the developing countries,” he said. Germany’s Federal Government ought to take advantage of its G7 Presidency this year as well as its position as the second-largest donor to call for more money and international efforts to overcome hunger world-wide. Countries should commit themselves to providing at least an additional total of 14 billion US dollars a year for food security, the two organisations demanded.