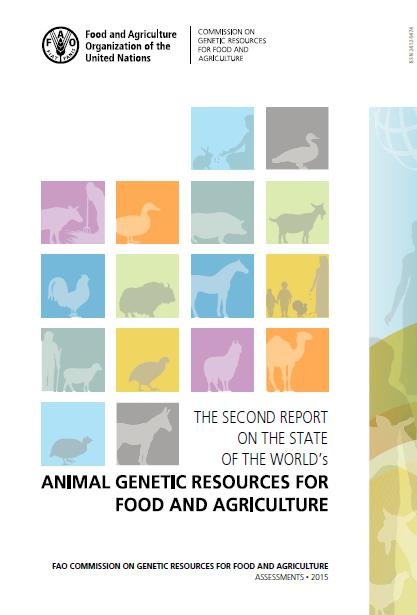 State of the World's Animal Genetic Resources for Food and Agriculture

FAO warns that many valuable animal breeds continue to be at risk and calls for stronger efforts to use the pool of genetic resources sustainably.

According to the Second Report on the State of the World's Animal Genetic Resources for Food and Agriculture, some 17 percent of the world's farm animal breeds are currently at risk of extinction, while the risk status of some other 58 percent is simply unknown due to a lack of data on the size and structure of their populations.

The report released in January 2016 perceives that nearly 100 livestock breeds have gone extinct between 2000 and 2014.  For instance, Europe and the Caucasus, and North America are the two areas in the world with the highest proportion of at-risk breeds. These regions are characterised by highly specialised livestock industries that tend to use only a small number of breeds for production.

Country data shows that indiscriminate cross-breeding is considered as the main cause of genetic erosion. Other common threats to animal genetic diversity are the increasing use of non-native breeds, weak policies and institutions regulating the livestock sector, the decline of traditional livestock production systems, and the neglect of breeds considered not competitive enough.

The report notes that genetic diversity provides the raw material for farmers and pastoralists to improve their breeds and adapt livestock populations to changing environments and changing demands.  Livestock keepers and policy makers worldwide are increasingly interested in harnessing animal biodiversity to improve production and food security on a warmer, more crowded planet.

The study finds that governments are increasingly recognising the importance of sustainably using and developing the genetic resources embodied in livestock. Currently, some 38 species and 8,774 separate breeds of domesticated birds and mammals are used in agriculture and food production.

When FAO published the first global assessment in 2007, fewer than 10 countries reported having established a gene bank. That number has now risen to 64 countries, and an additional 41 countries are planning to establish such a gene bank, according to the new report.