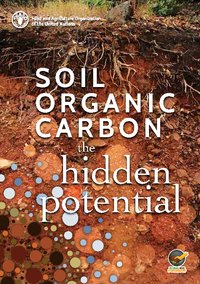 Soil management could make or break climate change response efforts because the Earth's soil carbon reservoir could either release greenhouse gases into the atmosphere or sequester them, according to a report by FAO.

Carbon is sequestered underground after being "fixed" from the atmosphere via plants or organic resi-dues
and then incorporated into soils through largely natural processes. Soil carbon content consists of both living and dead components, and can include both field stubble as well as decayed materials from millen-nia ago.

This adds up to a vast reservoir of carbon, according the report. But when soil is disturbed or degraded, trapped carbon and other greenhouse gases resulting from decay are re-released back into the atmos-phere. This means that the Earth's soil carbon reservoir could either release massive amounts of green-house gases into the atmosphere, or sequester more of them, depending on the management decisions we make going forward, the report says.

Already, one-third of the planet's soils are degraded, leading to an enormous decrease in global soil or-ganic
carbon stocks and the release of up to 100 gigatonnes into the atmosphere. Further damage to soil car-bon stocks through poor soil management will hamper efforts to limit global temperature rises and avoid increased floods, droughts and other climate change impacts, warns Soil Organic Carbon: The Hidden Po-tential.

Meanwhile, rising temperatures and an increased frequency of extreme weather events will lead to addi-tional losses of soil organic carbon, making improvement management even more urgent. Of particular concern are soils with high levels of organic content, like peatlands and temperature-vulnerable perma-frost zones. These "hot spots" will likely become net sources of greenhouse gas emissions in the future, barring effective interventions. The main greenhouse gases emitted by soil are carbon dioxide and me-thane; another is nitrous oxide, whose emission is increasingly being driven by human activity in the live-stock sector.