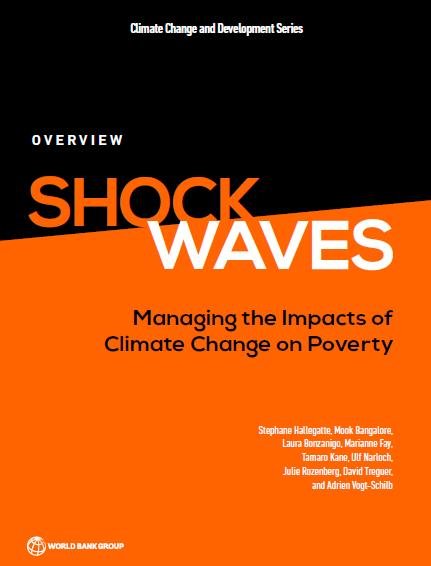 Shock Waves : Managing the Impacts of Climate Change on Poverty

According to ‘Shock Waves : Managing the Impacts of Climate Change on Poverty’ a recently released report by World Bank; climate change threatens the objective of sustainably eradicating poverty.

The report published in January 2016 perceives that, poor people and poor countries are exposed and vulnerable to all types of climate-related shocks;- natural disasters that destroy assets and livelihoods; waterborne diseases and pests that become more prevalent during heat waves, floods, or droughts; crop failure from reduced rainfall; and spikes in food prices that follow extreme weather events. Climaterelated shocks also affect those who are not poor but remain vulnerable and can drag them into poverty.
The authors therefore note that  ending poverty will not be possible if climate change and its effects on poor people are not accounted for and managed in development and poverty-reduction policies. But neither can the climate be stabilised without acknowledging that ending poverty is an utmost priority.

The need for a win-win strategy

The key finding of the report is that climate change represents a significant obstacle to the sustained eradication of poverty, but future impacts on poverty are determined by policy choices: rapid, inclusive, and climate informed development can prevent most short-term impacts whereas immediate propoor, emissions reduction policies can drastically limit long term ones.