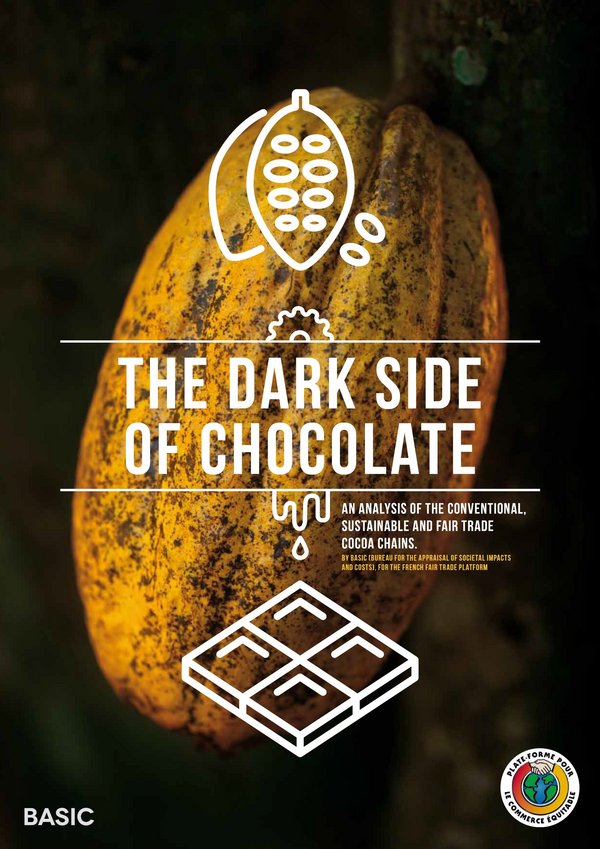 Shedding light on the dark side of chocolate

A new study compiled for the French Fair Trade Platform suggests that fair trade ensuring that cocoa producers earn enough to cover their production costs and the basic needs of their families can improve the sustainability of the cocoa chain.

The demand for cocoa and cocoa products is growing steadily on a global scale. The bulk of the world’s cocoa production comes from smallholders. According to the United Nations Conference on Trade and Development (UNCTAD), between five and six million farmers grow the plant on plots under five hectares. But cocoa processing and chocolate manufacturing is almost exclusively carried out by a handful of transnational corporations. Just six of these giants account for 50 per cent of the global chocolate market. Small farmers lack information on market conditions and negotiating power to confront the major manufacturers, so that most of them are unable to achieve prices for their produce that would lift them above the poverty line. Downward pressure on smallholders frequently forces them to resort to short-term strategies such as chemical inputs and deforestation to boost productivity and child labour to cut labour costs.

“The Dark Side of Chocolate” is an analysis of conventional, sustainable and fair trade cocoa chains that was prepared for the French Fair Trade Platform by the Paris-based Bureau for the Appraisal of Societal Impacts and Costs (BASIC). The study uses a large number of scientific articles, specialist reports and interviews to compare the societal costs of conventional cocoa chains with results from “sustainable” and “fair trade” certified chains in Peru and Côte d’Ivoire. “Societal costs” refers to all direct and indirect, present and future expenses and losses suffered by third persons, the public at large and society in general as a result of the social, sanitary and environmental costs of models of production and consumption. It is these “hidden costs” of the cocoa chain that the study seeks to expose.

Since the 1960s, around 13 million hectares, or 80 per cent, of Côte d’Ivoire’s forest cover has disappeared, much of it having given way to cacao plantations. Peru’s agroforestry approach conserves forests. However, more than 2,000 hectares has been deforested by United Cacao, a company that announced in 2015 that it intended to replicate Southeast Asia’s plantation model in the country. United Cacao CEO Dennis Melka stresses that unlike in Côte d’Ivoire, Peru allows cocoa producers to sell anywhere in the world, and with no export taxes. Child labour is widespread in the cocoa value chain. Children working in plantations are largely exposed to the harmful effects of chemical inputs. Child slavery has been on the increase in Côte d’Ivoire, although there are no reports of this practice in Peru.

The survey maintains that sustainable certification schemes have achieved little for producers, stating that cocoa producers’ incomes remain low and unstable. Neither do these schemes appear to halt deforestation. There is no evidence of reductions in child labour. The application of chemical inputs is at the same level as on conventional farms, while even more fertiliser is used. Thus these schemes do not contribute to mitigating air, water and soil contamination. However, employing staff trained to use chemicals has reduced health hazards in some of the co-operatives taking part in the schemes.

The fair trade movement sets out from the assumption that farmers can maintain a decent and dignified livelihood through their work, and that they can adopt agricultural practices that preserve the environment and biodiversity, the precondition for this being remunerative and stable prices for their produce. The study suggests that fair trade can significantly improve the sustainability of the cocoa chain as long as cocoa producers earn enough to cover their production costs and the basic needs of their families. Furthermore, they require strong grassroots organisations such as co-operatives. The third major prerequisite is substantial investments in basic social services and local infrastructure. The authors also note that the successful examples the analysis refers to rely on alternative agricultural practices such as agroforestry.