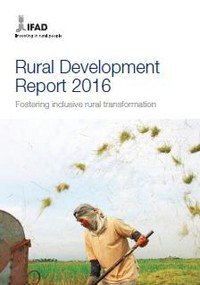 According to the Rural Development Report 2016, small farms continue to provide livelihoods for up to 2.5 billion people and account for up to 80 per cent of food produced in Asia and sub-Saharan Africa. The report perceives that in a fast changing world, rural areas must transform and rapidly in order to be sustainably included in growing economies and to contribute to overall prosperity.

The report published by the International Fund for Agricultural Development (IFAD) in September 2016; focuses on inclusive rural transformation as a central element of the global efforts to eliminate poverty and hunger, and build inclusive and sustainable societies for all. It however acknowledges the need to address the challenges posed by rural-urban immigration especially among the youth.

According to the report, a bulging youth population is most evident in sub-Saharan Africa, and to a lesser extent Latin America and the Caribbean. Migration, both rural-urban and international, is a common response to a lack of economic opportunities for young people.

The further you go, the more you tend to earn. Remittances can spur rural development in source regions, including through investments in agriculture by those left behind, but it’s often the least poor who migrate furthest and whose families accrue the most benefits.

Rural transformation is not automatic, notes report. It is a choice. And the choices made by governments and development practitioners have an enormous impact on the lives of people and nations. Based on extensive research, this report provides a solid foundation on which to base these choices.