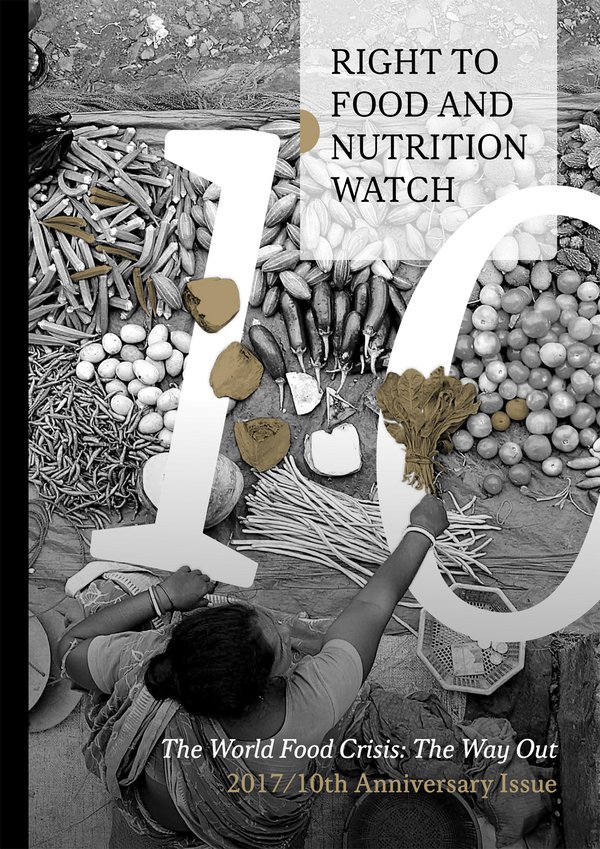 Right to Food and Nutrition Watch

The first Right to Food and Nutrition Watch appeared in 2008, as a consequence of the world food price crisis. Ten years later, despite some progress, many of the problems that led to the crisis persist, the authors of the 10th Anniversary Issue maintain.

-The major world food price crisis in 2007/2008 led to the number of people living in hunger exceeding the one billion mark for the first time. This was also the birth of Right to Food and Nutrition Watch, launched by eight civil society organisations. Its aim was to strengthen the monitoring and accountability for the right to food and nutrition. In the 10th anniversary issue, subtitled “The World Food Crisis: the way out”, the Watch Consortium and the Global Network for the Right to Food and Nutrition, each now comprising around 30 civil society organisations and social movements, take stock of the decade since the 2007/08 world food crisis and look ahead towards the challenges and opportunities that the coming period appears to be coming up with.

The publication features ten main articles. The first two pieces are framing articles assessing the origins and consequences of the 2007/08 world food crisis and what the authors refer to as the ‘ongoing human rights crisis’. They are followed by thematic articles on some of the most pivotal issues and developments around the human right to adequate food and nutrition: the need to fully recognise women’s work and rights with regard to nutrition, the challenges that building new agrifood systems faces, the ‘commons’ approach, the impacts of corporate power in food systems, global trade rules and their impact on food and nutrition security and the question of whether efforts to achieve the right to food and nutrition in emergencies are on the right track.

The articles are complemented by concrete stories and experiences from social movements’ struggles from all over the world – from Argentina through Somaliland, Yemen and France to Haiti and Nepal.

The publication is available in English, French, Spanish and Portuguese.