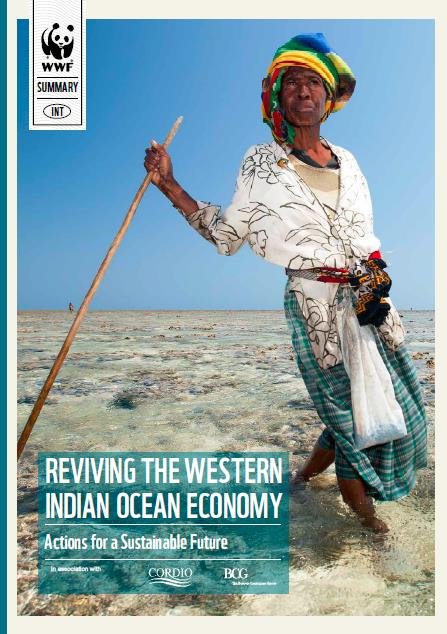 This report finds the Western Indian Ocean assets regions are valued in billions, but foreshadows significant challenges for the region’s ocean-based economies and food supplies in the absence of stronger conservation actions.

Analysis of ‘Reviving the Western Indian Ocean Economy: Actions for a Sustainable Future’ a recently released report show that the leaders of the Western Indian Ocean face a clear and urgent choice. To continue with business-as-usual, overseeing the steady decline of ocean assets; or to seize the moment to secure the natural ocean assets that will be crucial for the future of fast-growing coastal communities and economies.

The report released in January 2017, is the result of an in-depth, joint assessment by The Boston Consulting Group (BCG), CORDIO East Africa and WWF. It combines a new economic analysis of the region’s ocean assets with a review of their contribution to human development.

The Western Indian Ocean region described in this report includes Comoros, France, Kenya, Madagascar, Mauritius, Mozambique, Seychelles, Somalia, South Africa and Tanzania – a mix of mainland continental and island states. The report shows that the region’s most valuable assets are fisheries, mangroves, seagrass beds and coral reefs. Adjacent coastal and carbon-absorbing assets are also central to the wellbeing of communities and the health of the ocean economy.

The analysis finds that the region is heavily dependent on high-value ocean natural assets that are already showing signs of decline. The report offers a set of priority actions required to secure a sustainable, inclusive ‘blue economy’ for the region, and thus to provide food and livelihoods for growing populations.

The report also points to the likelihood that much of the actual fishing in the region is for local, domestic consumption via small-scale fishing which is not adequately monitored, or measured in economic terms, so the actual extent of fishing and its importance to local communities is likely to be far greater than economic analyses indicate.