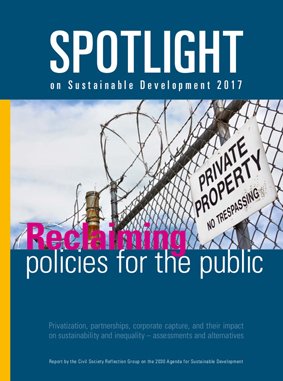 Reclaiming policies for the public

The 2030 Agenda contains a commitment by governments to revitalise global partnerships between states and stresses the crucial role of public finance in achieving the SDGs. But the Spotlight Report on Sustainable Development 2017, titled “Reclaiming policies for the public”, maintains that the public sector has in fact been weakened as a provider of essential goods and services by factors such as tax avoidance, corporate lobbying and policies based on a neoliberal ideology. The Spotlight Report is supported by a wide range of civil society organisations and trade unions, and its input has been provided by national and regional groups and coalitions all over the world. The publication, which appears annually, is conceived as a global Shadow Report accompanying the reports presented by governments and international organisations on their implementation of the 2030 Agenda and the SDGs, and its articles and textboxes cover all the areas that the SDGs refer to, including agriculture and nutrition.

“A battlefield of two opposing worldviews”

Implementing SDG 2, which addresses ending hunger, achieving food security and improved nutrition as well as promoting sustainable agriculture, is taking place in a “battlefield of two opposing worldviews on modernity and food and nutrition, which are supported by two equally distant production, marketing and distribution systems”, according to Stefano Prato of the Society for International Development. Prato contrasts a “corporate model that views food as a commodity, where consumers are identified merely as individuals with purchasing power” that “is based on the privatization of the commons” with “local community responses based on small-scale production, unfortunately often trapped into subsistence farming, which view food as a fundamental human right and regard food consumers as fellow citizens and rights-holders”.

Prato claims that the narratives guiding the process of implementing SDG2 facilitate the “corporate capture of agriculture and nutrition”. Whereas smallholders currently account for up to 70 per cent of global food production, the need is emphasised to boost production and investments in agribusiness. While industrial agriculture itself causes biodiversity loss and contributes to climate change, biotechnologies are proposed to adapt intensive agriculture to the new climate conditions. Instead of promoting diversified diets based on agrobiodiversity, there is a push for nutrition-sensitive agriculture and bio-fortification to make up for deficits resulting from industrial products based on large-scale production of a handful of crops. And finally, Prato points to a “mirage of structural transformation that calls for people to move out of agriculture and engage in better paid industrial and service-based employment”, whereas “mono-directional trade liberalization is generating new patterns of de-industrialization and premature tertiarization of developing economies, particularly within the African continent, that fall dramatically short of the claimed employment expectations”.

Concentration in the agricultural inputs sector is moving forward in huge strides, as the Action Group on Erosion, Technology and Concentration explains in the Spotlight Report. The ETC Group, which addresses socioeconomic and ecological issues surrounding new technologies that could affect the world’s poorest and most vulnerable people, maintains that three mega-mergers are set to take place that could put the remaining entities in control of at least 60 per cent of global commercial seed sales and 71 per cent of global pesticide sales. Concentration processes in the seed and pesticides sectors are stifling a much needed paradigm shift towards diversity-based farming practices, argues Lim Lee Ching of the Third World Network. She calls for adopting approaches such as agroecology, also to address the problem of climate change.

Lim Lee Ching warns that an oligopoly of giant corporations such as that described by the ETC Group could force global food systems to follow “a narrow technological path, characterized by ongoing dependence on proprietary seed, including genetically engineered seed and agrochemical inputs”.  She argues that concentration in power in food systems is leading to less diversity in the crops grown because of the tendency towards standardised, input-intensive crop varieties and away from traditional varieties and agricultural diversity. Supported by DivSeek, a major international gene-banking project, the giant agribusinesses could gain proprietary control of plant genes, sequences and traits, resulting in “the ultimate corporate capture of agricultural biodiversity that is meant to be held in trust”.

Simone Lovera of the Centre for Sustainable Development Studies (CSDS) at the University of Amsterdam, the Netherlands, maintains that biodiversity policy has been informed by neoliberal economic theories promoting the privatisation and commodification of what biodiversity provides. Lovera argues that reference under SDG 15 to “ecosystems and their services” has supported a discourse on the values of these services and “encouraged governments to establish markets or other economic incentive schemes that provide payments for these ecosystem services”.

The Spotlight Report is published by the Reflection Group on the 2030 Agenda for Sustainable Development, comprising the Arab NGO Network for Development (ANND), the Center for Economic and Social Rights (CESR), Development Alternatives with Women for a New Era (DAWN), Global Policy Forum (GPF), Public Services International (PSI), Social Watch, Society for International Development (SID) and Third World Network (TWN), and it is supported by Germany’s Friedrich Ebert Foundation.