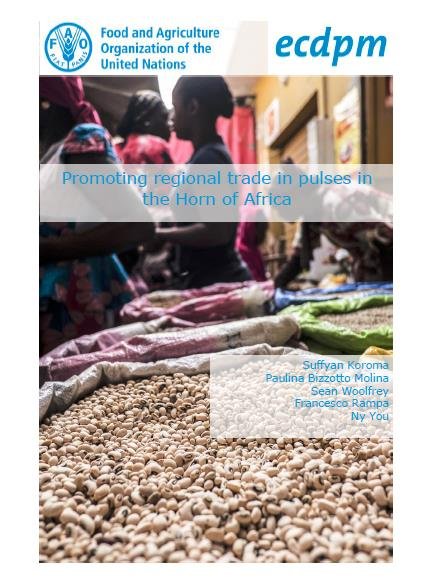 Promoting regional trade in pulses in the Horn of Africa

An increased demand for processed food based on pulses offers opportunities of employment and entrepreneurship for women and youth, while the demand for pulses and residues as animal feed is also growing due to changing diets,notes report.

According to a report published by FAO and ECDPM in December 2016, despite all prospects pulses present, pulses production and yields in Africa and the Horn remain lagging behind potential. There is also a lack of reliable information on the actual and potential of regional trade. In addition public and private investments have long favoured cereal crops over pulses, perceives the report.

Moreover, african leaders strongly voiced their determination that Africa should be able to feed itself by 2025. This ambitious agenda, completely aligned with the SDGs, but even more ambitious for setting the goals five years before the SDG horizon of 2030, stresses the need to increase public and private investments in agriculture, necessary to boost production and productivity. But it also captures the importance of trade in achieving food and nutrition security on the continent. Tripling intra African agricultural trade is now much more central in the agricultural transformation agenda than it has been before.

The report, ''Promoting regional trade in pulses in the Horn of Africa'' perceives that prospects of global and regional trade in pulses are good. India is still the largest producer and importer of pulses in the world, but also in (the Horn of) Africa trade flows are growing. Urbanisation trends and changing diets, but also the aid programmes in the region create particular dynamics in the pulses market. Ethiopia is quickly becoming a major player in pulses, while Sudan is still one of the main producers of groundnut in Africa.

The report therefore highlights the main challenges faced by stakeholders along the value chain. Effective public-private dialogue at a regional level could contribute to addressing those constraints, by sharing best practices and coordinating activities around a regional strategy.