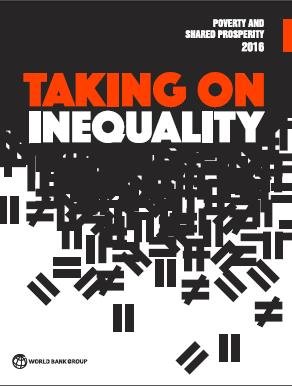 According to a new World Bank report, extreme poverty worldwide continues to fall despite the lethargic state of the global economy. The report on poverty and shared prosperity warns that given projected growth trends, reducing high inequality may be a necessary component to reaching the world’s goal of ending extreme poverty by 2030.

The Poverty and Shared Prosperity series provides a global audience with the latest and most accurate estimates on trends in global poverty and shared prosperity, as well as in-depth research into policies and interventions that can make a difference for the world’s poorest.
The 2016 edition released in October 2016 takes a close look at the role that inequality reduction plays in ending extreme poverty and improving the livelihoods of the poorest in every country. It looks at recent country experiences that have been successful in reducing inequality, provides key lessons from those experiences, and synthesizes the rigorous evidence on public policies that can shift inequality in a way that bolsters poverty reduction and shared prosperity in a sustainable manner.

In 60 out of the 83 countries covered by the new report to track shared prosperity, average incomes went up for people living in the bottom 40 percent of their countries between 2008 and 2013, despite the financial crisis. Importantly, these countries represent 67 percent of the world’s population.