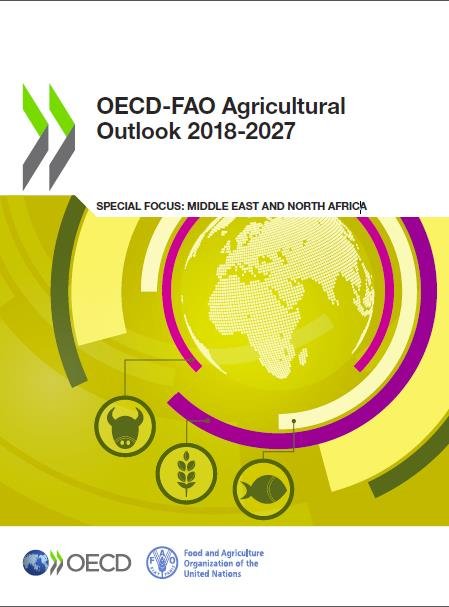 Slowing population growth is expected to lead to a decelerating demand for food, according to the Agricultural Outlook 2018-2027 published by OECD and FAO.

The OECD-FAO Agricultural Outlook 2018-2027 was published by the Organisation for Economic Cooperation and Development (OECD) and the Food and Agriculture Organization of the United Nations (FAO) in early July 2018.

It provides an overview on the current global agricultural production as well as a forecast for the coming decade. Furthermore, it includes a special chapter on the Middle East and North Africa (MENA), a region that faces simultaneous issues of food insecurity, rising malnutrition and management of limited natural resources.

The annual report states that global agricultural production is growing steadily across most commodities, reaching record levels in 2017 for most cereals, meat types, dairy products and fish, while cereal stock levels have climbed to all-time highs.

The report attributes the demand slowdown to a deceleration of demand growth in major emerging economies, stagnating per capita consumption of staple foods, and a further gradual decline in global population growth rates.

Weakening of global demand over the coming decade

The Outlook finds that global agricultural and fish production is projected to grow by around 20 per cent over the coming decade, but with considerable variation across regions. Strong growth is expected in developing regions with more rapid population growth, including Sub-Saharan Africa, South and East Asia, and the Middle East and North Africa.

According to the authors, the weakening of global demand will persist over the coming decade, sapped by declining population growth, flat levels of per capita consumption for staple foods and slowing demand growth for meat products. Declining demand growth for meat products will put a brake on the demand for cereals and protein meal used in animal feed.

With slower consumption and production growth, agricultural and fish trade are projected to grow at about half the rate of the previous decade. Net exports are expected to increase from land-abundant countries and regions, notably the Americas. Countries with high population growth, in particular in the Middle East and North Africa, Sub-Saharan Africa and Asia, will see rising net imports.

Demand for cereals and vegetable oil for the production of biofuels is expected to be largely unchanged over the forecast period, in contrast with the past decade, when biofuels expansion led to more than 120 million tonnes of additional cereals demand, predominantly maize.

With existing policies in developed countries unlikely to support biofuels expansion, most demand growth will come from developing countries that have introduced policies favouring biofuel use. In particular, the use of sugarcane for biofuel production is expected to increase.