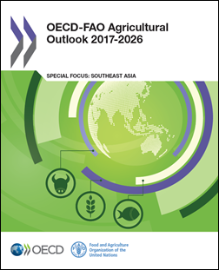 Experts from OECD and FAO see slower growth in food demand and infer that this could keep world food prices low in the coming years.

Global food commodity prices are projected to remain low over the next decade compared to previous peaks, according to the OECD-FAO Agricultural Outlook 2017-2026 published by the Organisation for Economic Co-operation and Development (OECD) and the Food and Agriculture Organization of the United Nations (FAO) in July 2017.

The authors base this projection on the fact that demand growth in a number of emerging economies is expected to slow down and biofuel policies are having a diminished impact on markets. Like every year, the Outlook contains a special feature, this year focussing on Southeast Asia.

The report says that the completed replenishment of cereal stocks by 230 million metric tonnes over the past decade, combined with abundant stocks of most other commodities, should also help limit growth in world prices, which are now almost back to their levels before the 2007-08 food price crisis.

The authors foresee per capita demand for food staples remaining flat, except in least developed countries. Additional calories and protein consumption over the outlook period are expected to come mainly from vegetable oil, sugar and dairy products. Growth in demand for meat is projected to slow, with no new sources of demand being projected that would maintain the momentum previously generated by China.

By 2026, average calorie availability is projected to reach 2 450 kcal per person per day in least developed countries, and to exceed 3 000 kcal in other developing countries. Food insecurity and malnutrition in all its forms will nonetheless remain a persistent global problem, requiring a coordinated international approach, according to the report.

Future growth in crop production is projected to be principally attained through higher yields, growth in meat and dairy production, by contrast, is expected to come from both larger herds and higher output per animal.

It is foreseen that aquaculture would dominate growth in the fish sector and farmed fish production will be the fastest-growing protein source among all commodities analysed in the Outlook. For nearly all commodities, exports are projected to remain concentrated in a few supplying countries, which may imply a greater susceptibility of world markets to supply shocks.

In Southeast Asia, economic growth has been strong and the agriculture and fish sectors have developed rapidly in the region. The report finds that this broad-based growth has enabled the region to significantly reduce undernourishment in recent years. However, the growth of agriculture and fisheries, in particular in the export-oriented fish and palm oil sectors, has led to rising pressure on natural resources.

Greater focus on sustainable development in Southeast Asia will slow the growth of palm-oil production, according to the Outlook. Across the agricultural sector, yields will continue to increase, but cropland is projected to expand by only 10 per cent over the next 10 years, compared to 70 per cent over the previous decade.