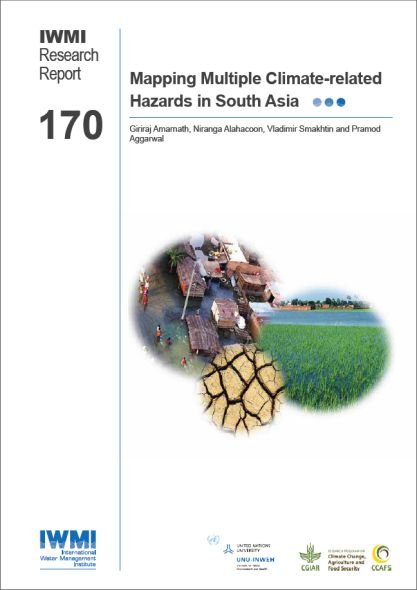 A new report by the International Water Management Institute (IWMI) provides an overview of the multiple climate hazard risks in South Asia. It suggests methods for mapping such risks and estimating their impacts on people and agriculture.

Almost 750 million people in South Asia were affected by a combination of climate hazards in the decade after 2000, according to a research report published by International Water Management Institute (IWMI) in June 2017. The report further identifies agriculture as the most vulnerable sector.

The research report presents a detailed approach to mapping hazards and identifying risks for floods, droughts, extreme rainfall, extreme temperature and sea‐level rise in South Asia. The study applies a consistent methodology across different climate‐related hazards, includes assessments of the population affected along with agricultural losses and makes use of spatial data and customised tools.

Climate variability poses a significant threat to populations across the world, with the poor and
disadvantaged at the greatest risk. South Asia, and the Indo‐Gangetic plain in particular, is at high risk from floods. According to the Government of India, the country’s economy is closely linked to its natural resource base, with millions of people dependent on climate‐sensitive livelihood sectors, such as agriculture, water and forestry. Bihar, the most flood‐prone state in the country, is also vulnerable to droughts.  Floods have caused it an agricultural loss of almost 22 billion Rupees (0.34 billion USD) in the past twelve years.