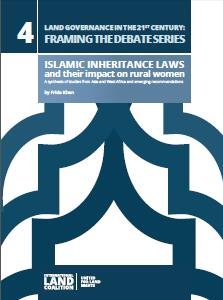 The studies report on an interconnected mix of legal, religious, educational, economic, social and political reasons for discriminatory inheritance practices.

“Islamic inheritance laws and their impact on rural women” is part of a series of studies commissioned by the International Land Coalition (ILC) aimed to improve understanding of the barriers that prevent women from achieving tenure security, with a particular focus on inheritance laws in Muslim societies and the practices that influence women’s land rights.

The studies analysed inheritance laws and their impacts on rural women in Bangladesh, India, Pakistan, Indonesia, Senegal, Togo, and Mali. The studies focused on Muslim societies, but also looked at how these differed from, mirrored, or influenced the inheritance practices of non-Muslim groups in the same countries.

The studies showed that women continue to be systematically denied their rights to inheritance, especially in rural areas. Inheritance practices are deeply embedded in local culture and tradition and, even though civil and religious laws exist that protect women’s inheritance, customary laws are found to prevail, which largely exclude women from property ownership and inheritance. Disinheritance undermines women’s economic security and independence and reinforces gender inequality.

This publication commissions renowned land experts to share their perspectives on key issues, while acknowledging and fairly discussing other views. The papers published in the Framing the Debate series are intended to be accessible to a wide audience of land specialists as well as non-land experts.
This publication serves to better understand the current state of the land governance debate, to trigger further debate and pave the way for future study.