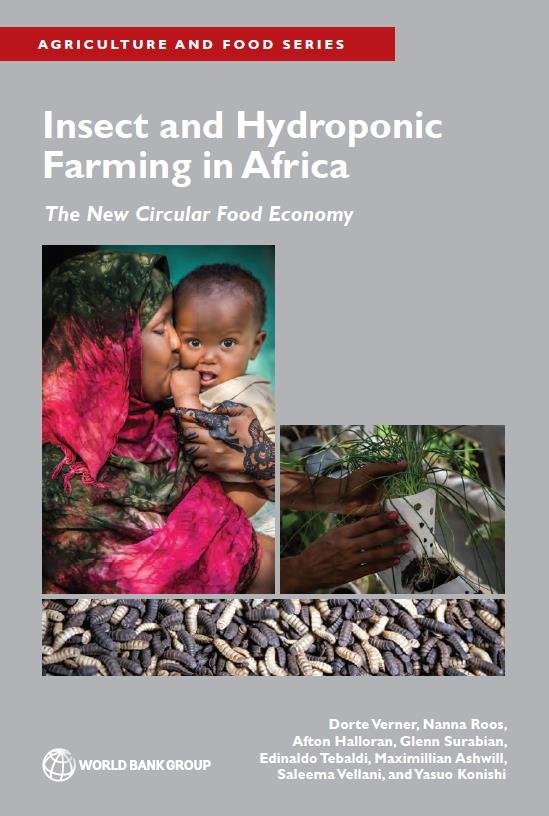 A new report shows how insect and hydroponic crop farming can help establish a circular food economy in Africa, particularly in fragile countries.

Insect and hydroponic crop farming for human food and animal feed could increase access to nutritious food. This is the finding of a new World Bank report Insect and Hydroponic Farming in Africa: The New Circular Food Economy, which was published in December 2021. Moreover, these farming practices have the potential to create millions of jobs, improve the climate and the environment, and strengthen national economies.

An estimated two billion people globally consume insects that are collected in the wild. Farming insects specifically for human and animal consumption would help secure a year-round supply, increase insect quality and meet the growing demand for animal protein. The authors point out that combining hydroponic crops – which require very little water and no arable land – with insect farming would have a number of benefits, ranging from improved nutrition to climate resilient production synergies.

Together, these technologies improve food and nutrition security while reducing waste, taking pressure off land and water resources, and helping to reduce greenhouse gas emissions. They can also save farmers money and governments hard currency reserves by decreasing imports and purchases of food, feed, and fertilisers. Small-scale operations can be established at low cost, opening up opportunities for climate resilient jobs, including for women, young people and refugees, who often live in locations with limited resources.

Both technologies fit within a circular economic model that can supplement conventional farming. Organic waste from various sources (e.g. conventional agriculture, hydroponics, leftover food or even breweries) can be fed to insects in order to quickly produce nutritious and protein-rich foods for humans, fish, and livestock. Waste from insects can be fed back into the system as organic fertiliser.

The number of new entrants and markets for insects around the world is increasing. It is estimated that the global market for insect-based food and animal feed will be worth up to USD 8 billion by 2030, based on an average growth rate of 24 per cent per year over the next decade. To expand insect and hydroponic farming, the report recommends establishing and piloting these technologies, then scaling them up to bring down costs and enhance their competitiveness. Working together with its partners, the World Bank is currently starting pilot projects in selected African countries.

Hydroponic farming is not new to Africa, and there are more than 850 insect farms producing food and feed. Using agricultural waste as feed, the African insect farming sector could generate crude protein worth up to USD 2.6 billion and biofertilisers worth up to USD 19.4 billion annually. According to the report, this equates to around 14 per cent of the crude protein needed to rear all the pigs, goats, fish, and poultry in Africa.