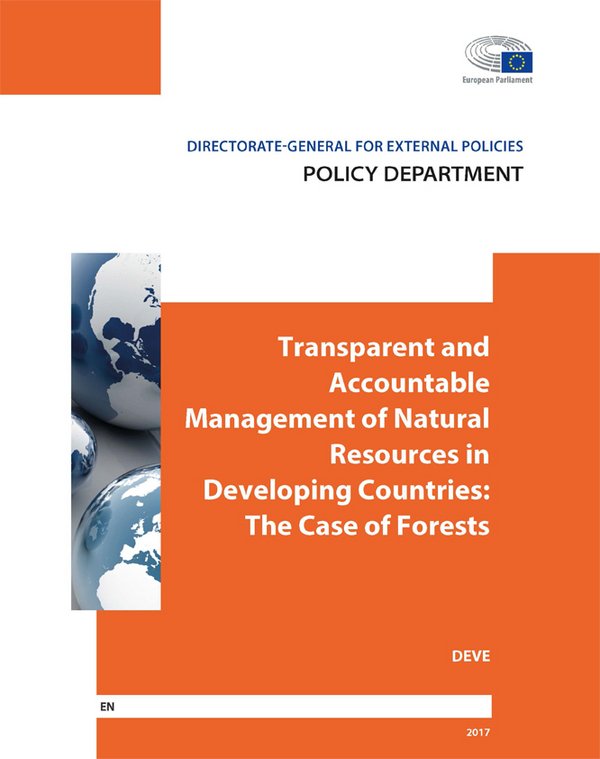 What is the state of transparency and accountability in the forestry sector in developing countries? And what influence are European Union policies having on national forest policies? The World Agroforestry Center has had a look at this issue with regard to a number of African countries.

At 624 million hectares, around 15.6 per cent of forests world-wide are located in the African continent. From 1990 to 2015, 81.6 million hectares of African forest vanished. This corresponds to around 60 per cent of total forest loss. Forest conservation is not only a development co-operation topic but also plays an essential role in the context of climate change, which is why the EU has already been pursuing an active policy focusing on resource-friendly forest management and combating illegal logging for some years.

A recent study by the World Agroforestry Center (ICRAF) in Nairobi, Kenya, shows just how effective such a policy is. Together with the ASB Partnership for The Tropical Forest Margins Kenya, experts evaluated the forest policies of African countries. The study was presented by ICRAF Policy Consultant Patrick Worms at the EU Committee on Development in late June.

One of the most important causes of rainforest destruction is illegal logging. To counter this, already in 2003, the EU launched the Forest Law Enforcement, Governance and Trade (FLEGT) plan of action. It centres on Voluntary Partnership Agreements (VPA) with individual countries. This was followed in 2013 by the European Timber Regulation, which seeks to stop illegal timber imports to the EU.

The authors of the study arrive at the conclusion that both FLEGT and the Timber Regulation have had a positive impact in the areas of transparency and credibility. However, the policies have not shown any effects regarding sustainable management and links to REDD+ (Reducing Carbon Emissions from Deforestation and Forest Degradation) or the establishment of management structures. These findings come at a time when the demand for timber is growing increasingly, especially in China.

Illegal logging is one of the greatest threats to sustainable forest management and has resulted in countries losing a substantial amount of income. World-wide, damage to economies is put at an annual ten billion dollars. Half of this is lost revenue for the countries’ governments. According to Patrick Worms, illegal logging is performed by masses of individuals or small groups of individuals equipped with simple chainsaws rather than being carried out on a large scale. In Ghana, illegal logging has been estimated to account for 30 per cent of all logging, in Cameroon for 50 to 60 per cent and in Gabon for 70 per cent, while the figure for Benin and Nigeria is 80 to 90 per cent. Cameroon alone loses an annual 4.5 million euros in timber revenue, Gabon 8.5 million and Ghana a staggering 32 million.

The second most important reason for the loss of timber is the corruption involved in awarding logging permits and a lack of transparency regarding the origin of the timber traded. Ninety-five per cent of Africa’s forests are the property of governments and local communities. In Cameroon, all forests are government-owned, while the local communities hold the rights of use. In Ghana, the landowners only own the trees if they themselves have planted them.

There are hardly any management plans for forest management. This is above all due to an extreme scarcity of data on the state of the forests. The rights of indigenous peoples to use the forests are hardly respected. The study found that in Cameroon, the various policy departments such as economics, social affairs and agriculture had not co-ordinated their policies. However, forestry legislation was being prepared.

The development of local timber markets could promote sustainable use and make it more difficult to pursue illegal logging. To achieve this, in addition to monitoring, traceability and transparent data, administrative authorities with sufficient staffing would have to be developed.

The EU is attributed a pioneering role in the world-wide timber trade. In the context of the Sustainable Development Goals, certifications and standards for sustainable forest management ought to be made more stringent.