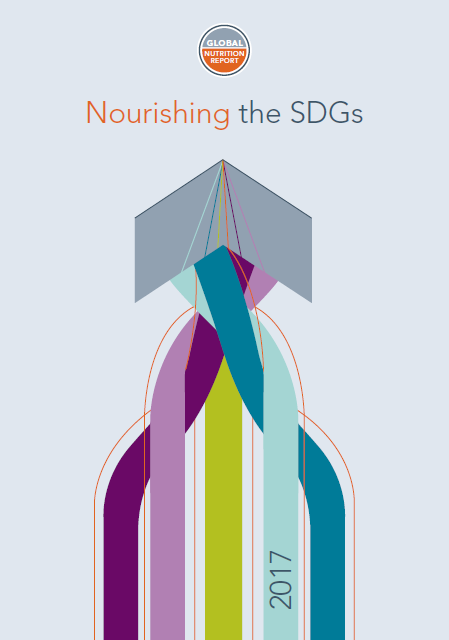 The Global Nutrition Report 2017 calls for nutrition to be placed at the heart of efforts to end poverty, fight disease, raise educational standards and tackle climate change.

This year’s edition of the annual Global Nutrition Report „Nourishing the SDGs“ was published in November 2017. The report was produced by an Independent Expert Group empowered by the Global Nutrition Report Stakeholder Group.  It states that almost every country in the world faces a serious nutrition-related challenge, whether stemming from undernutrition or obesity.

In all 140 countries studied, the report found ‘significant burdens’ of three important forms of malnutrition used as an indicator of broader trends: childhood stunting, anaemia in women of reproductive age and overweight adult women.

According to the report, overweight and obesity are on the rise in almost every country while the rates of undernutrition in children are decreasing, but not fast enough. Rising rates of anaemia in women of reproductive age are also cited as a concern, with almost one in three women affected worldwide and no country on track to meet global targets.

The authors state that without additional effort, it will be difficult to meet the global target of halting the rise in obesity and diabetes by 2025 as well as meeting the internationally agreed nutrition goals, including the Sustainable Development Goals (SDG) target 2.2 to end all forms of malnutrition by 2030.

Donor funding for nutrition rose by just two per cent in 2015, to USD 867 million, representing a slight fall in the overall percentage of global aid. The authors are calling for a tripling of global investments in nutrition over 10 years to tackle childhood stunting, wasting and anaemia and to increase breastfeeding rates. Crucially, donors are only spending 0.01 per cent of official development assistance on diet related Non-Communicable Diseases.

Of the 203 commitments made at the Nutrition for Growth Summit in 2013, those most likely to be classified as ‘on course’ are the UN agencies’ at 86 per cent, followed by ‘other organisations’ at 75 per cent and NGO policy commitments at 73 per cent.

The report found there is a critical need for better data on nutrition - many countries don’t have enough data to track the nutrition targets they signed up to and to identify who is being left behind.