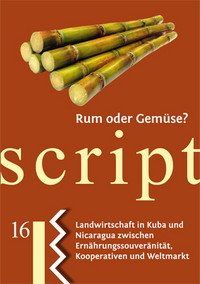 Food sovereignty in Cuba and Nicaragua

How can the notion of food sovereignty be reconciled with the need to generate foreign exchange? What is the role of government policy in food sovereignty? Does the need to feed the population restrict ecological and climate-change ambitions in Nicaragua and Cuba? These are some of the issues addressed by a publication of the German Nicaragua Information Centre.

Supported by Germany’s “Stiftung Umwelt und Entwicklung NRW”, a foundation set up by the state government of North Rhine-Westphalia to promote the implementation of Agenda 21, a 13-member team of students, trade unionists, scientists and representatives of Community-Supported Agriculture (CSA) initiatives toured Nicaragua and Cuba for one month to establish the role of food sovereignty in these two Central American countries. The survey, headed by the Nicaragua Information Centre in Wuppertal, Germany, focuses on the context for efforts to achieve food sovereignty, the factors considered by the governments and how smallholder agriculture relates to the need to obtain foreign exchange via exports.

Following the toppling of the Batista regime in Cuba in 1959, key economic sectors such as banking, energy supply and sugar were nationalised, and the new revolutionary government put particular emphasis on improving food supply, education and healthcare. Prior to 1959, 70 per cent of the land had belonged to just eight big landowners. An extensive land reform was implemented, although no forced collectivisation took place. Smallholders were organised by the National Small Farmers Association of Cuba (ANAP). As members of the Credit and Service Co-operatives (CCSs), they could retain control of their land while joining together to market produce, obtain credit and buy machinery.  ANAP also created Agriculture Production Cooperatives (APCs) with collective ownership of productive assets. By 1989, 78 per cent of arable land was owned by the state and worked by farm labourers, while 10 per cent belonged to the APCs and 12 per cent to the CCSs. In the same year, 44 per cent of agricultural produce was for home food and 53 per cent for export, above all sugar.

Nicaragua saw the Somoza dictatorship ousted in 1979, and like in Cuba, major sectors of the economy were nationalised, including the country’s coffee-growing. Towards the end of the eighties, 57 per cent of the land was worked by medium-sized farmers and smallholders and 24 per cent by co-operatives, while 13 per cent was state-owned.

Cuba’s economy relied heavily on trade with the Eastern Bloc COMECON countries, especially in terms of sugar exports. Cuba used to be the world’s biggest sugar producer, and the Soviet Union was its largest customer, accounting for 60 per cent of its sugar exports in 1987, while sugar represented 84 per cent of the island’s exports to that country. With the collapse of the Eastern Bloc, Cuba’s economy took a nosedive, and two thirds of the sugar mills closed down. Today, 70 per cent of food is imported, and the country is constantly seeking markets for its produce to pay for the imports. Over the years, the trade embargo originally imposed by the USA in 1962 has resulted in a considerable lack of machinery, pesticides and fuel in agriculture. Supported by ANAP, smallholders and co-operatives are now increasingly opting for agro-ecological farming to compensate for import-dependent input.

Nicaragua, meanwhile, experienced a reform rollback in the nineties. Nationalised enterprises were reprivatised, and much of the smallholder and co-operative property was sold off. Agricultural policy was refocused, with growth now oriented on export, and sugar cane used increasingly for the production of bioethanol. High levels of technology were introduced for the now all-important cash crops, and foreign investment was welcome. While malnutrition levels among the population have since increased, Nicaragua can still boast the highest levels of self-supply in Central America, although imports continue to be crucial. Its exports go largely to other Central American countries and Venezuela. Whereas agro-industry plays a major role in Nicaragua’s economy, smallholder organisations and co-operatives continue to engage in sustainable agriculture and are campaigning for government support.

Both countries rely heavily on agricultural exports to cover food supply. Adding to their difficulties is the severe impact of climate change in the region. How can the notion of food sovereignty be reconciled with the need to generate foreign exchange? And does the need to feed the population restrict ecological and climate-change ambitions in Nicaragua and Cuba? How do co-operatives, smallholders and private farms relate to one another? What is the role of government policy in food sovereignty? And how does free trade and globalisation impact on the social situation? These are some of the issues addressed in “Landwirtschaft in Kuba und Nicaragua zwischen Ernährungssouveränität, Kooperativen und Weltmarkt”, published by the Nicaragua Information Centre. Both the book and an accompanying film are also available in Spanish.