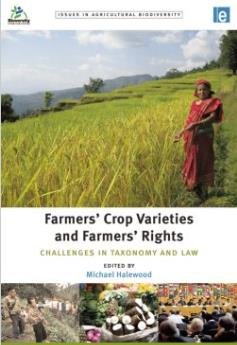 The role that farmers play in the development and conservation of crop genetic diversity, and the contribution of that diversity to agro-ecosystem resilience and food security is of paramount importance says new book.

A new book, Farmers’ Crop Varieties and Farmers’ Rights, examines crop plant varieties developed by local farmers commonly referred to as farmers’ varieties  and policies to increase the share of benefits farmers receive from the use of those varieties.

According to the authors of the book, there has been a growing appreciation of the important role that farmers play in the development and conservation of crop genetic diversity, and the contribution of that diversity to agro-ecosystem resilience and food security.

The book published by Earthscan in association with Bioversity International was released in April 2016 and focuses on two fundamental and interlinked questions.

The book includes contributions from agronomists, anthropologists, geneticists, biologists, plant breeders, lawyers, development practitioners, activists and farmers.
It presents case studies from Asia, Africa, Latin America and Europe where, in response to a diversity of contributing factors, there have been efforts to develop policies that provide incentives or rewards to farmers as stewards of farmers’ varieties in ways that are sensitive to the cultural, taxonomic and legal complexities involved.

The book situates these initiatives in the context of the evolving discourse and definition of ‘farmers' rights’, presenting insights for future policy initiatives.