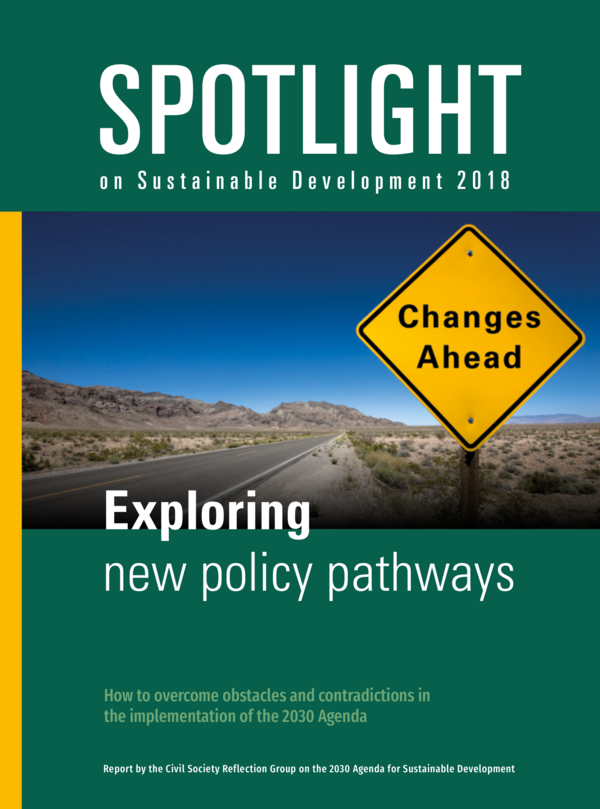 The Spotlight Report on Sustainable Development 2018 includes a chapter on the links between food, health and the environment that calls for new priorities and approaches to make food systems sustainable. The Report was launched on the opening day of the High Level Political Forum at the United Nations in New York/USA by a global coalition of civil society organisations and trade unions.

The close links between food, health and the environment are highlighted by the International Panel of Experts on Sustainable Food Systems (IPES-FOOD) in “Exploring new policy pathways”, the latest Spotlight Report by the Civil Society Reflection Group on the 2030 Agenda for Sustainable Development.

Elaborating the notion of a “food-health-environment” nexus, IPES-FOOD argues that a range of health risks in food systems are deeply entwined with climate change and degradation, while climate change itself is aggravating health impacts and affects food security and agricultural practices, which in turn contribute to climate change.

Climate change, IPES-FOOD points out, can increase the incidence of pests, parasites and microbes in various regions but may also create temperature-related changes in contamination levels. The expansion of industrial agriculture, it maintains, has driven changes in land use, increasing the risk of zoonotic diseases and exacerbating to climate change, which in turn is a major factor in land use change. And agricultural practices, IPES-FOOD argues, are undermining ecosystems and their potential to deliver services such as controlling soil erosion or purifying water.

IPES-FOOD claims that the implementation of the 2030 Agenda “has been dominated by a distressing narrative about the urgent need to leverage private sector engagement, investments and resources”. It questions whether big agribusiness offers the solution to hunger, malnutrition and climate change and refers to a comparison of the “Peasant Food Web” and the “Industrial Food Chain” by the ETC Group, the Action Group on Erosion, Technology and Concentration. The “Web” comprises small-scale producers ranging from farmers and pastoralists to fishers and urban producers. The “Chain” consists of a sequence of links from the production of inputs such as seeds and fertilisers to grocery retailers, and stands for the corporate food system.

The ETC Group points out that the Web is a key source of food for 70 per cent of the world’s population and produces 70 per cent of the world’s food in calories and weight. In contrast, 76 per cent of crop calories in the Chain is either wasted or diverted, e.g. into biofuels. Peasants in the Web have bred 2.1 million varieties of 7,000 crop species, compared to the Chain’s 0.1 million seed varieties. And while peasants have domesticated at least numerous species of livestock and nurtured several thousands of breeds, the Chain concentrates on a mere handful of species and less than 100 commercial breeds. The resulting extreme genetic uniformity, the ETC Group argues, is to blame for a rise in zoonotic diseases and their increasing incidence among humans.

According to ETC Group, the Chain uses more than 75 per cent of agricultural land and destroys 75 million tonnes of topsoil annually, while the pesticides it applies threaten soil microbes and pollinators. Whereas agriculture in general accounts for 70 per cent of the world’s freshwater withdrawals, the Chain uses most of this amount in irrigation, livestock and processing. Also, the Chain is responsible for at least 90 per cent of agriculture’s fossil fuel consumption and greenhouse gas emissions. Human rights violations that the ETC Group refers to range from using child labour through driving peasants off their land to killing peasants for having saved their seeds.

IPES-FOOD concludes that the Peasant Food Web is “the safest option to address the intertwined challenges of identity, livelihoods, health and ecology that food systems are urgently pressed to confront”. However, it emphasises that reorienting food systems towards food sustainability requires more than just focusing policies and investments on peasants. Rather, a paradigm shift towards diversified agricultural systems is needed.

IPES-FOOD proposes agroecology as a viable alternative to industrial agriculture. Based on a holistic approach and system thinking, agroecology combines scientific knowledge with peasant knowledge and experience to conceive holistic agro-ecosystems. While sustainable food systems for an important aspect of agroecology, IPES-FOOD points out that its approach also provides “a foundational vision for an inclusive, just and sustainable society”.