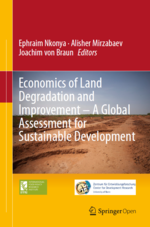 “Economics of Land Degradation and Improvement”

Over the last three decades, 33 per cent of grasslands, 25 per cent of croplands and 23 per cent of forests experienced degradation. The results of a study on the cost and drivers of land degradation and strategies for sustainable land management are summarised in a new publication.

Despite the crucial role land plays in human welfare and development, investments in sustainable land management are low, especially in developing countries. The costs of doing nothing about land degradation are several times higher than the costs of taking action to reverse it, as the book “Economics of Land Degradation and Improvement – A Global Assessment for Sustainable Development” reveals. It is published by the Center for Development Research (ZEF) at the University of Bonn, Germany, and the International Food Policy Research Institute (IFPRI).

The book is based on case studies from twelve countries: Argentina, Bhutan, China, Ethiopia, India, Kenya, Niger, Russia, Senegal, Malawi, Tanzania and Uzbekistan. It focuses on two kinds of land degradation: long-term loss of value of land ecosystem services due to land use and cover change (LUCC) and the use of land-degrading management practices on cropland and grazing lands that do not undergo LUCC. Six major biomes that accounted for about 86 per cent of global land area in 2001 are covered, including forest, shrublands, grasslands, cropland, barren land, and woodlands.

Some of the main findings:

The country case studies demonstrate that even poor countries can achieve sustainable development through policy and institutional changes that incentivise land users to invest in restoring degraded lands and preventing land degradation. One success story is Niger. This country shows that improved government effectiveness and rule of law make it easier for people to adopt sustainable land management practices. Environmentally friendly policies and cultural values have given Bhutan the most stable forests and the largest share of land area under forest of any country in the world – around 70 per cent. And about 25 per cent of its population live in protected areas. There is virtually no deforestation in Bhutan. This achievement reflects the key role that country policies and customary institutions play in protecting ecosystem services.

The book is available for download (free of charge)