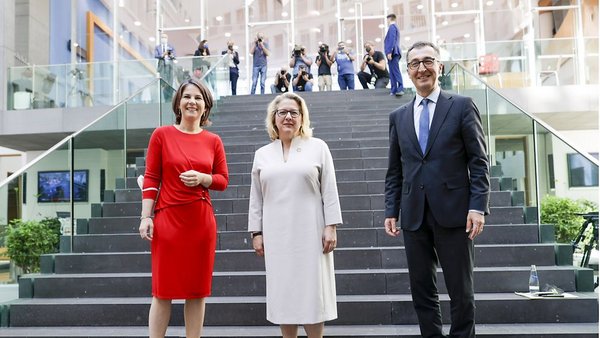 Represented by its Foreign Secretary and Development and Agriculture Ministers, in the run-up to the G7 Summit, the German Federal Government invited around 50 representatives of governments, international organisations and civil society to Berlin/Germany in late June to discuss a coordinated and effective response to the global hunger crisis, which had been dramatically aggravated by Russia’s war of aggression against Ukraine.

According to the World Food Programme, in the past two years, the number of severely food insecure people around the world has more than doubled to 276 million.

To take stock of progress made in joint efforts to overcome the global food security crisis, and to join forces in moving ahead in this common endeavour, governments, international and regional organisations, multilateral development banks, NGOs and philanthropists met in the run-up to the G7 Summit at Schloss Elmau at the Conference “Uniting for Global Food Security”” in Berlin, Germany on the 24th June 2022.

The international conference was hosted by German Government, represented by Minister for Foreign Affairs Annalena Baerbock, Minister for Economic Cooperation and Development Svenja Schulze and Minister of Food and Agriculture Cem Özdemir.

Participants noted that Russia’s invasion of Ukraine was putting food security and nutrition for millions of people at risk and was further exacerbating the already dire situation regarding global food security, caused amongst others by armed conflicts, climate change and the consequences of the COVID-19 pandemic.

They agreed that this multi-dimensional crisis required a joint and effective global response combining diplomacy, humanitarian assistance, development cooperation as well as agricultural and food policies.

“Four aspects will be crucial in our efforts today,” Minister Baerbock said in her opening speech. First, joining forces to get Ukraine’s food export out of the country. Second, stepping up human assistance. Third, addressing underlying factors to make the world less vulnerable to food crisis. And fourth, looking closely in the possible indirect effects of sanctions. “We are not on a sprint, but on a long distance run,” she said.

“The goal of ending hunger by 2030 (SDG2) is moving further and further out of reach,” Minister Schulze pointed out. She highlighted the importance of the Global Alliance for Food Security, which, with the African Union on board, was “not an Alliance about the Global South but an alliance with the Global South”.

“Food for human beings comes first,” said Minister Özdemir, pointing out that “when we are talking about long-term food security, we need an ethical discussion on how crops are being used, as food, feed or fuel”.

In a video message, United Nations Secretary-General António Guterres said that there was a real risk that multiple famines will be declared in 2022. “And 2023 could be even worse,” Guterres added.

The main costs to farmers were fertilisers and energy, he said. Fertiliser prices had risen by more than half in the past year, and energy prices by more than two-thirds. All harvests would be hit, including rice and corn – affecting billions of people across Asia, Africa and the Americas.

Guterres pointed out: “Humanitarian support is essential – but is not enough, because this is not just a food crisis. It goes beyond food and requires a coordinated multilateral approach, with multi-dimensional solutions.”

He explained that there could be no effective solution to the global food crisis without reintegrating Ukraine’s food production, as well as the food and fertiliser produced by Russia, into world markets – despite the war. He also noted that solving the food crisis would require solving the financial crisis in the developing world.

At the conference, the Director-General of the Food and Agriculture Organization of the United Nations (FAO), Qu Dongyu, outlined five urgent steps to halt the global food crisis and transform agrifood systems.

First, it was vital to invest in countries most severely affected by the increase in food prices. In addition to food aid, supporting local production of nutritious foods is was key.

Fifth, ensuring better and more efficient use of available fertilisers was of paramount importance.

Speaking about market transparency and the need to stabilise prices, Qu highlighted the importance of keeping global trade system open.