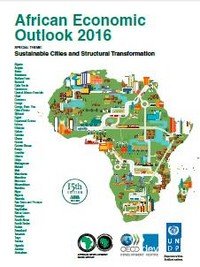 According to the African Economic Outlook 2016 released in May 2016 at the African Development Bank Group's 51st Annual Meetings, two-thirds of Africans are expected to live in cities by 2050.

The report notes that Africa’s economic performance held firm in 2015 amid global headwinds and regional shocks. The continent remained the second fastest growing economic region after East Asia. According to the report's prudent forecast, the continent's average growth is expected at 3.7 per cent in 2016 and pick up to 4.5 per cent  in 2017, provided the world economy strengthens and commodity prices gradually recover.

For its 15th edition, the African Economic Outlook takes a hard look at urbanisation and structural transformation in Africa and proposes practical steps to foster sustainable cities.

The continent is urbanising at a historically rapid pace coupled with an unprecedented demographic boom. Moreover, the population living in cities has doubled from 1995 to 472 million in 2015. This phenomenon is unlike what other regions, such as Asia, experienced and is currently accompanied by slow structural transformation, says the report's special thematic chapter.

According to the authors, lack of urban planning leads to costly urban sprawl. Moreover, urbanisation is a megatrend transforming African societies profoundly. Two-thirds of the investments in urban infrastructure until 2050 have yet to be made. The scope is large for new, wide-ranging urban policies to turn African cities and towns into engines of growth and sustainable development for the continent as a whole.

For instance, in 2015 approximately 879 million Africans lived in countries with low human development, while 295 million lived in medium and high human development countries. Africa's youth are particularly at risk from slow human progress. In sub-Saharan Africa nine out of ten working youth are poor or near poor.
The Outlook therefore calls on governments to make bold policy reforms in order to capture this urbanisation dividend.