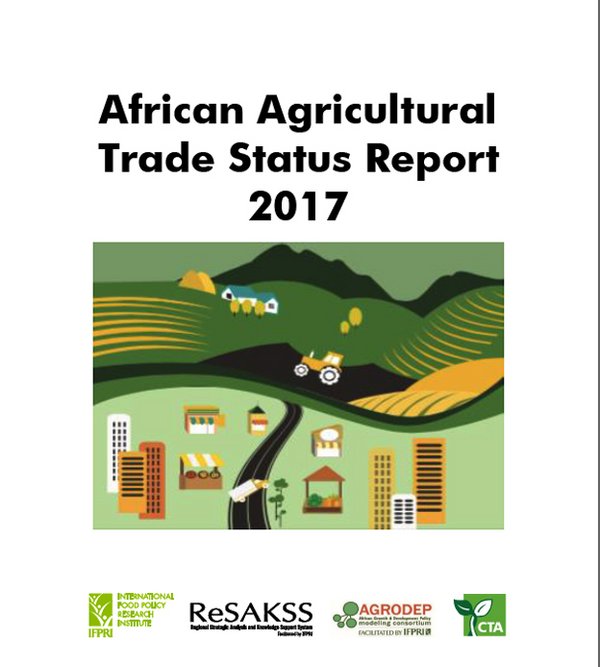 A report commissioned via the African, Caribbean and Pacific Group of States, the European Union and IFPRI, the International Food Policy Research Institute, takes a look at African agricultural trade and its prospects for the future.

Three years ago, in the Malabo Declaration on Accelerated Agricultural Growth and Transformation for Shared Prosperity and Improved Livelihoods, African leaders pledged to support efforts to triple intra-African trade in agricultural commodities and services by 2025. But while Africa’s economy has seen increases in exports in recent years, these have been offset by even larger growths in imports, worsening the continent’s trade balance. And while intra-regional trade is growing, it is still clearly lagging behind levels elsewhere. Commissioned by the ACP-EU Technical Centre for Agricultural and Rural Cooperation (CTA) and IFPRI, the African Agricultural Trade Status Report (TSR) looks at African trade performance in the sector and what it holds for the future.

Regional trade in Africa and between its various regions offers major opportunities for its economy, CTA and IFPRI maintain. They hold that trade has the potential to improve consumer welfare, boost overall economic growth and reduce poverty. And they emphasise that increased and more diversified agricultural trade could “facilitate the transformation of agriculture into a high-productivity sector providing adequate incomes for producers and stimulating growth in the economy”. However, to achieve this, the TSA concludes from its findings e.g. that efforts are required from policy-makers to increase agricultural productivity along the value chain and improve market access, and to support continent-wide efforts to promote trade facilitation in international negotiations.

The new report, based on research by the African Growth and Development Policy Modelling Consortium (AGRODEP) and the Regional Strategic Analysis and Knowledge Support System (ReSAKSS) of the Comprehensive Africa Agriculture Development Programme (CAADP), with input from the trade sector, is meant to back efforts by policy-makers, the private sector and development partners to promote the continent’s agricultural trade. CTA and IFPRI stress the need for an annual African trade report supported by a wider range of partners.

The TSR notes that while agricultural exports more than doubled between 1998 and 2013, imports increased fivefold between 1998 and 2013, driven mainly by rapid population growth and urbanisation, income changes through economic growth and changes in dietary patterns. The only region to have maintained a consistent trade surplus over the last decade is the Southern African Development Community (SADC). The report also states that the share of agricultural exports in Africa’s total exports declined by more than half in the period reviewed, although this was due to more rapidly rising exports in minerals and oil.

Intra-African agricultural trade has expanded significantly since 1998, although at 20 per cent, its share in total African trade is still very low, compared to 63 per cent among Asian countries and even 75 per cent in Europe. With the exception of the Central African States, most countries in Africa succeeded in maintaining or even increasing their competitiveness in global and regional markets. Crucial factors in this context include institutional quality, the ease of doing business and the quality of customs.

The study also points out that constraints on the supply side such as production capacity and the cost of trade have had a greater impact on improvements in agricultural export performance than demand-side constraints in importing countries such as trade policies and agricultural supports. It therefore advocates removing domestic constraints e.g. by improving infrastructure and increasing agricultural productivity. Focusing on West Africa, the TSR states that the countries there show a potential to lessen the impact of domestic shocks through increased regional trade. More intra-regional trade in this area can also reduce price volatility in local markets, it maintains.