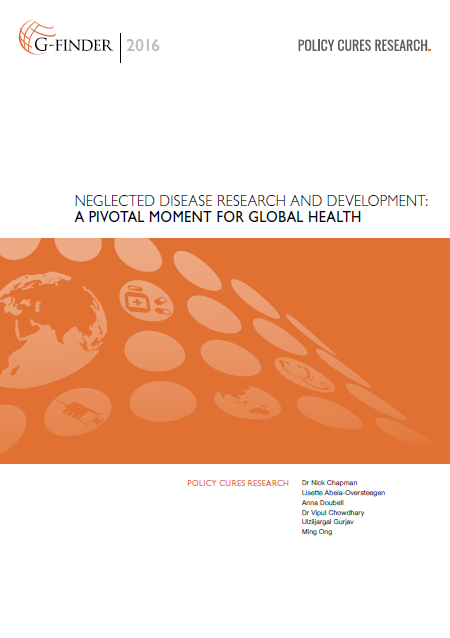 A pivotal moment for global health

The funding for neglected diseases is declining, according to the latest G-FINDER report „Neglected disease research and development: A pivotal moment for global health“.

The ninth annual G-FINDER report was launched by Policy Cures Research on 16 February 2017, in Brussels, Belgium. This survey reports on 2015 global investment in research and development (R&D) of new products for neglected diseases, and identifies trends and patterns across the nine years of global G-FINDER data.

The report found that USD 3.041bn was invested in global health research in 2015, a decline of 2.3 per cent since 2014. This is the third consecutive decline in funding, which has now fallen every year but one since 2009. This worrying decline in funding is reflected by the fact that this year’s report marked the lowest level of public funding for research since 2007, and the lowest level of US government funding on record.

According to the report, the European Union has overtaken the UK for the first time since 2008 as the world’s second-largest public funder of global health research targeted at HIV & AIDS, tuberculosis, malaria and neglected tropical diseases. The EU’s support for research funding increased 20 per cent year-on-year, totalling USD 125m. The EU’s increased investment in this area bucks the global trend, with both the US and the UK reducing their funding in 2015. The US still remains the world’s largest public funder, accounting for over two-thirds of all global health research funding.

The G-FINDER project has tracked and reported on global investments in neglected disease research and development (R&D) since 2008. The project has been funded by the Bill & Melinda Gates Foundation since its inception, with the G-FINDER team originally hosted at The George Institute for International Health before forming Policy Cures in 2010. Following the separation of Policy Cures into two separate organisations in 2016, G-FINDER is being conducted by Policy Cures Research, a new, independent, not-for-profit research group established by the research and policy team at Policy Cures.