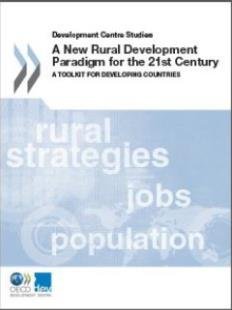 A New Rural Development Paradigm for the 21st Century

Without a new framework for rural development in developing countries, it is unlikely that the new Sustainable Development Goals will be met, warns notes OECD report.

'A New Rural Development Paradigm for the 21st Century' published by OECD in April 2016, perceives that the despite half a century of rural development theories and approaches, and the global momentum built around the Millennium Development Goals between 2000 and 2015; the conditions under which the world‘s poorests live continue to deteriorate.

According to the report, the living conditions for the billions of people living in rural areas in developing nations, when compared to their urban counterparts are worse off. This is when measured by almost any development indicator; from extreme poverty, to child mortality and access to electricity and sanitation. And the gulf is widening, contributing to large-scale migration to urban areas.

This book calls for a new paradigm for rural development that is equipped to meet the challenges and harness the opportunities of the 21st century. That includes;  climate change, demographic shifts, international competition and fast-moving technological change. The New Rural Development Paradigm set out in this publication draws on previous approaches and theories from developed countries regarding rural development.

It is conceptualised to be multi-sectoral, multi-agent and multi-level. The book focuses on eight components that include governance, multiple sector, infrastructure, urban-rural linkages, inclusiveness, gender, demography and sustainability.